The email that came into Bennett Taylor's inbox in July seemed simple enough. Tom Pearson, this academic year's Sketch Model Creative-In-Reference*, was looking for a student to help him design mechanical costumes for a show in mid-October in San Diego.

But it soon became clear to Taylor '22 that this was no ordinary theatrical production. Pearson is an artistic director of the New York-based Third Rail Projects, which eschews traditional dramatic form and narrative in favor of an immersive multimedia experience. In one of Pearson's past projects, the audience was immersed inside of a 1970s-era tropical resort featuring several beaches, a night club, and a human-sized aquarium where performers interacted with audiences inside a grotto of statues and a reflecting pool, among various other highly-saturated environments.

For his San Diego show, Pearson planned to riff on the themes of flight and failure. The Greek mythical figure Icarus would be a character. So would Amelia Earhart. And, as he explained to Taylor in their initial meetings, he wanted their costumes to be abstract, symbolic and visually stunning.

Undaunted, Taylor accepted the assignment. "My two main passions are building things and theater," he says. "The ability to build things for theater is everything I want to do."

Pearson says that Taylor proved the ideal collaborator. "We had a back and forth exchange where my ideas were helping him with design and his design would lead me to new ideas," he says. 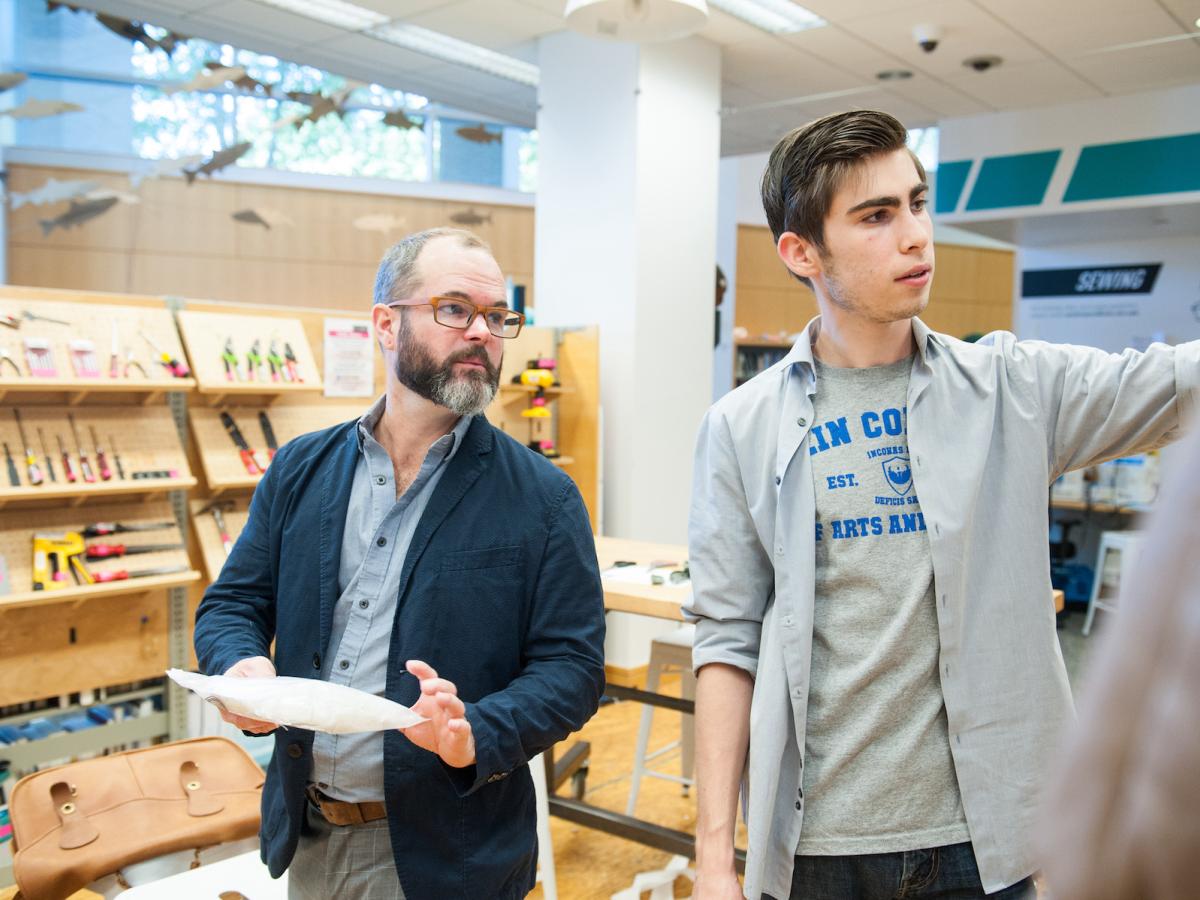 His current long-running New York show (2012-present), Then She Fell, transforms a building in Brooklyn into an Alice in Wonderland-inspired alternative reality where the audience explores hidden rooms, unearths clues and imbibes "elixirs" (in reality, custom-mixed cocktails).

It earned rapturous reviews. "This show occupies a dreamscape where the judgments and classifications of the waking mind are inoperative, and where the single self keeps splitting and blurring," The New York Times critic Ben Brantley wrote.

Pearson's show in San Diego, entitled Ikaros, is a commission by La Jolla Playhouse for their biennial Without Walls (WOW) Festival, a 4-day long theater event featuring experimental and multimedia artists from around the world. The shows don't take place in a theater but in outdoor or unusual spaces that become part of the dramatic experience.

Ikaros is performed within the grounds of a former naval training center on the San Diego Bay. The audience walks along a path, moving between what Pearson calls "movement-driven images," visually rich scenes featuring actors in an unfolding and fragmented puzzle-like narrative.

Taylor wound up designing four costumes for Ikaros. They all start with a bomber jacket, underneath which is a backpack frame worn by the actor. This enabled Taylor to attach various objects and contraptions to the back of the jacket by attaching them to the frame. 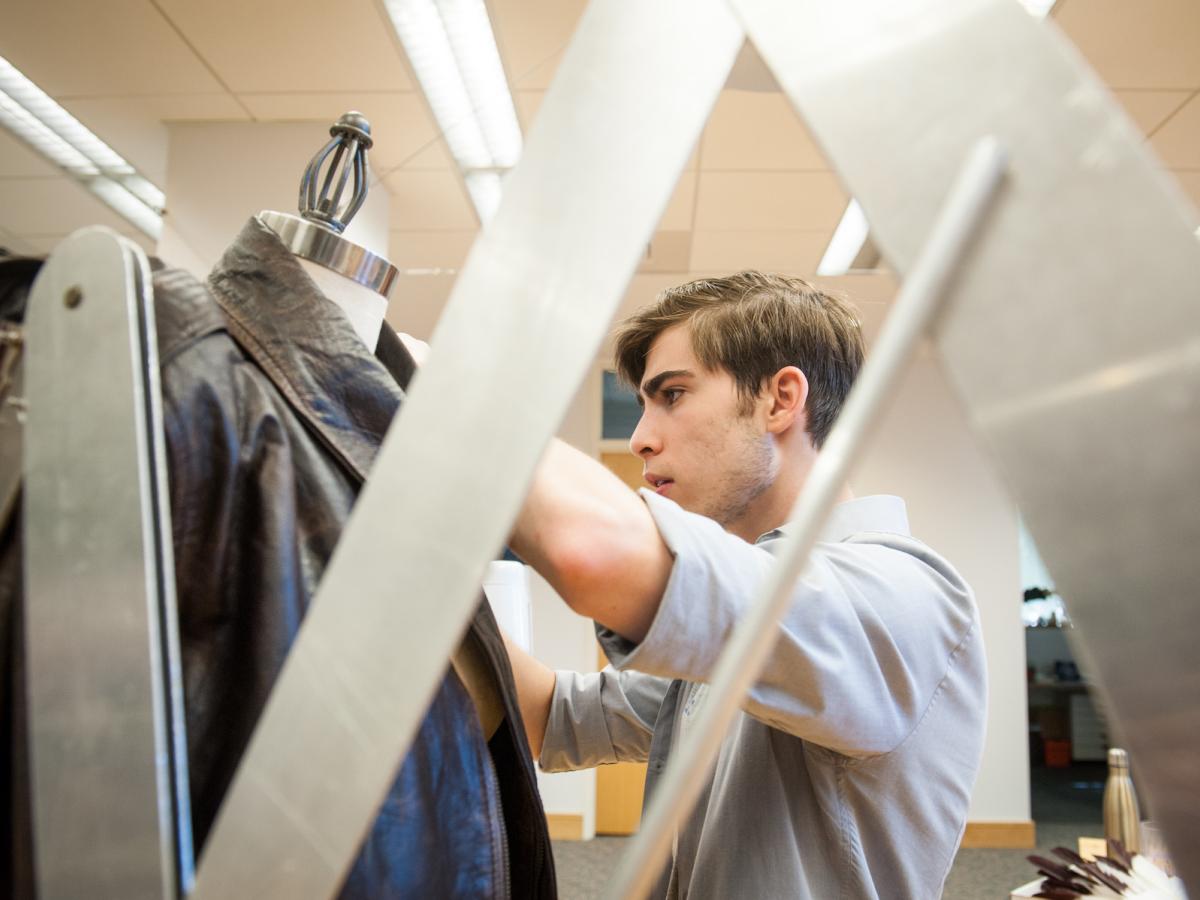 Bennett Taylor '22 looks over a leather bomber jacket that he designed as part of the collaboration with Tom Pearson, Olin's Sketch Model Creative-In-Reference.

The costume Taylor made for the Amelia Earhart character consisted of an aluminum propeller, which is then turned by a fan inside of the scene. Taylor says he designed the propeller in Illustrator but then bought a piece of aluminum and "hammered it like there was no tomorrow into the right shape." 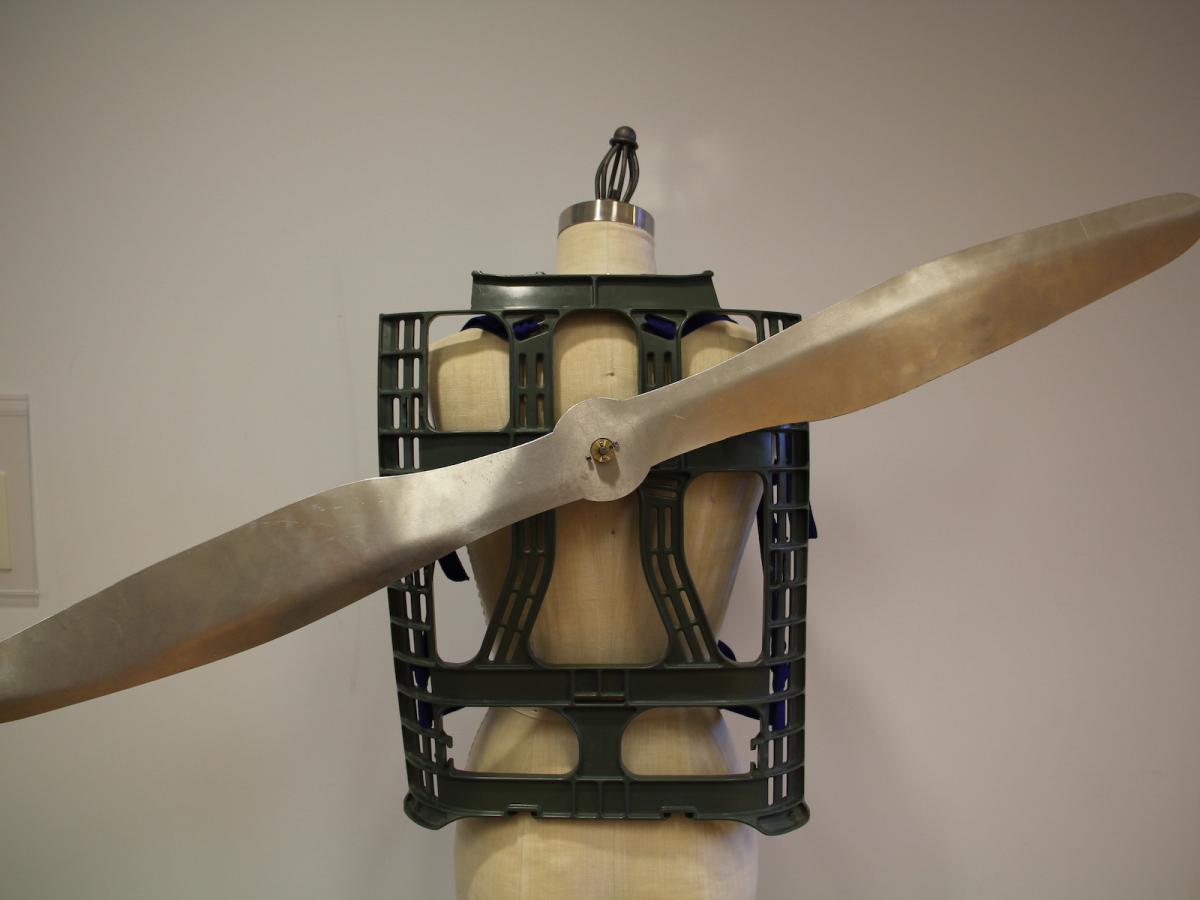 The aluminum propeller costume designed for the Amelia Earhart character in the play, Ikaros.

The costume for another character (who shapeshifts between Icarus’s father Daedalus, and the Asterion, the creature within the Labyrinth) features a 13-foot wide wingspan on each side of which hangs billowing, teardrop-shaped white fabric. It's meant as an allusion to the pre-Hellenic version of the Icarus myth where Daedalus invents the first sails that he uses to outrun the fleets of Minos.

In the show, the audience walks behind this sail-like character with his “wings” outstretched. The wing-sails then turn to reveal the panorama of the bay. 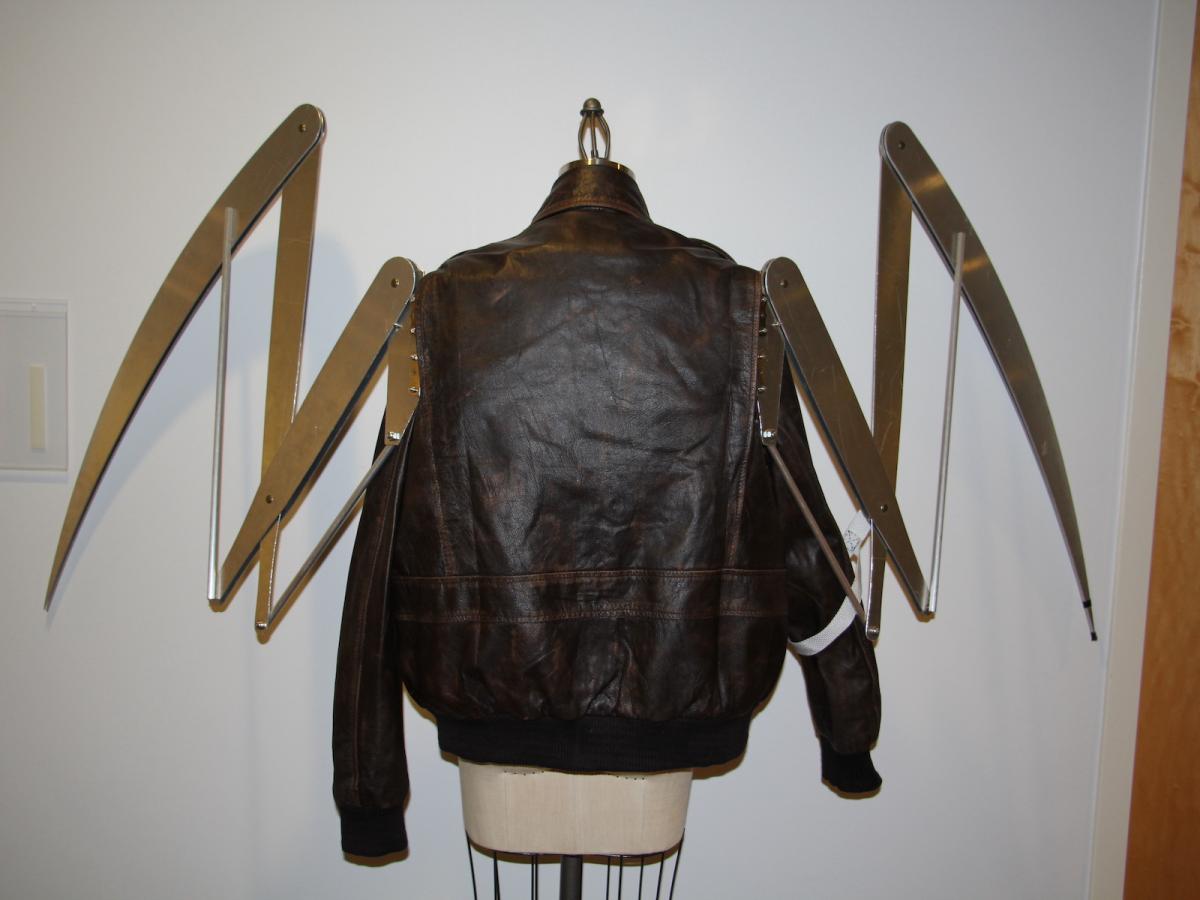 The last costume Taylor made is a pair of wings shorn of its feathers — just the underlying skeletal structure made from pieces of aluminum. It's meant to represent what Icarus' wings looked like before they became fully formed and he took flight. At another point in the show, the skeletal structure is seen damaged–the remains of his tragic flight–draping from Icarus emerging from the water (a different twist on the story, one where Icarus is damaged but alive). 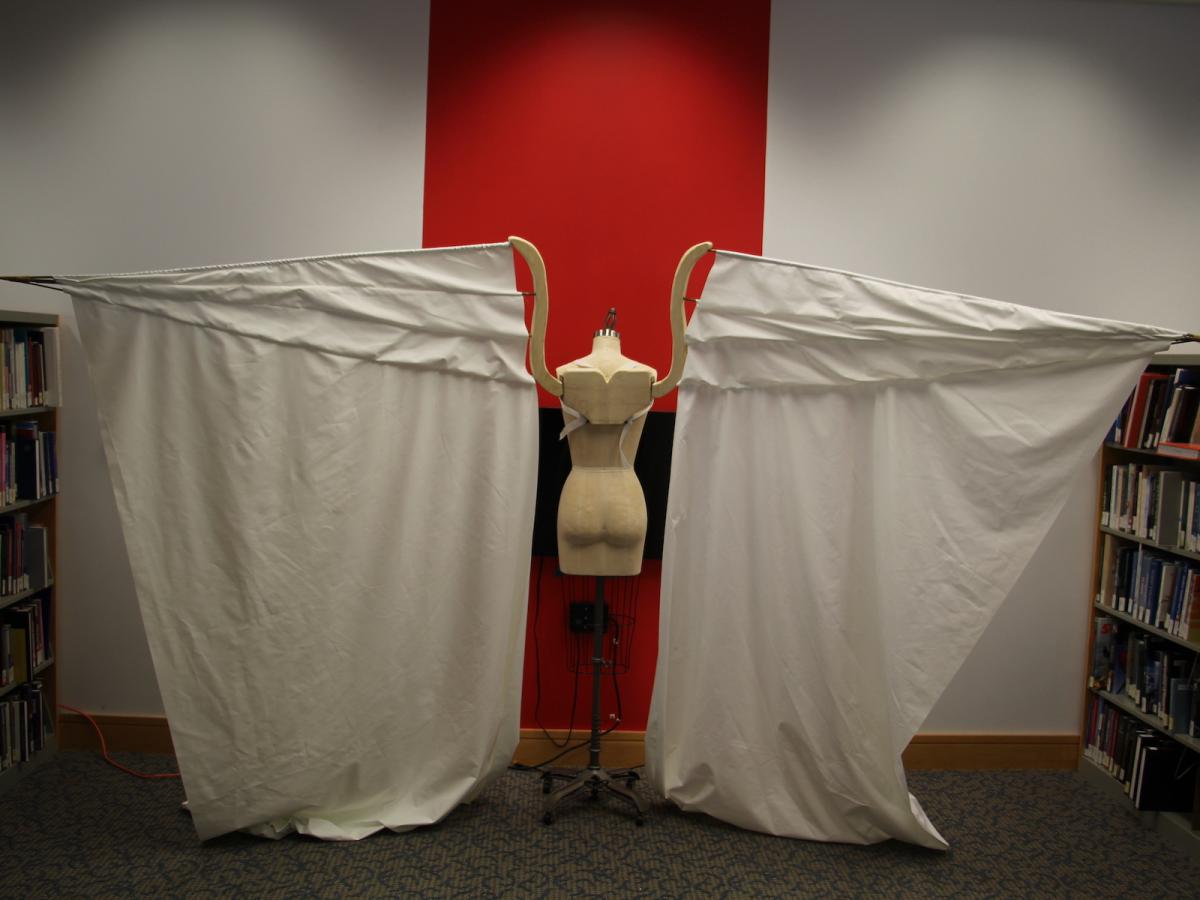 Pearson says working with Taylor has been just one of the ways his experience at Olin has helped him develop his creative ideas. He is also teaching a class this semester in experiential design for immersive theater.

"I'm finding it really incredible and inspiring to have so many different perspectives on what it means to create and design," he says. "It’s helped me envision new ways in which art, design and engineering all fit together."

*The creative-in-reference at Olin College is a position established as part of a multistep $900,000 grant from the Andrew W. Mellon Foundation designed to better integrate the arts and humanities within a STEM education. The term “creative-in-reference” was developed at Olin to signify a variation on the traditional residency model, one in which residents foster a more community-facing role emphasizing inherently social and collaborative projects. Tom pearson is the second Creative in Reference of the program.