Blasting Ahead in the Space Race

A multidisciplinary group of students from Olin and other Massachusetts colleges are working on perfecting a next-gen rocket that could change the face of space travel for decades to come.

Spearheaded by Braden Oh ’23, the multi-university team has been learning about the inner workings of an electric propulsion rocket called a Hall-effect thruster that is far lighter and faster than traditional rockets, not to mention 5–10 times more efficient. 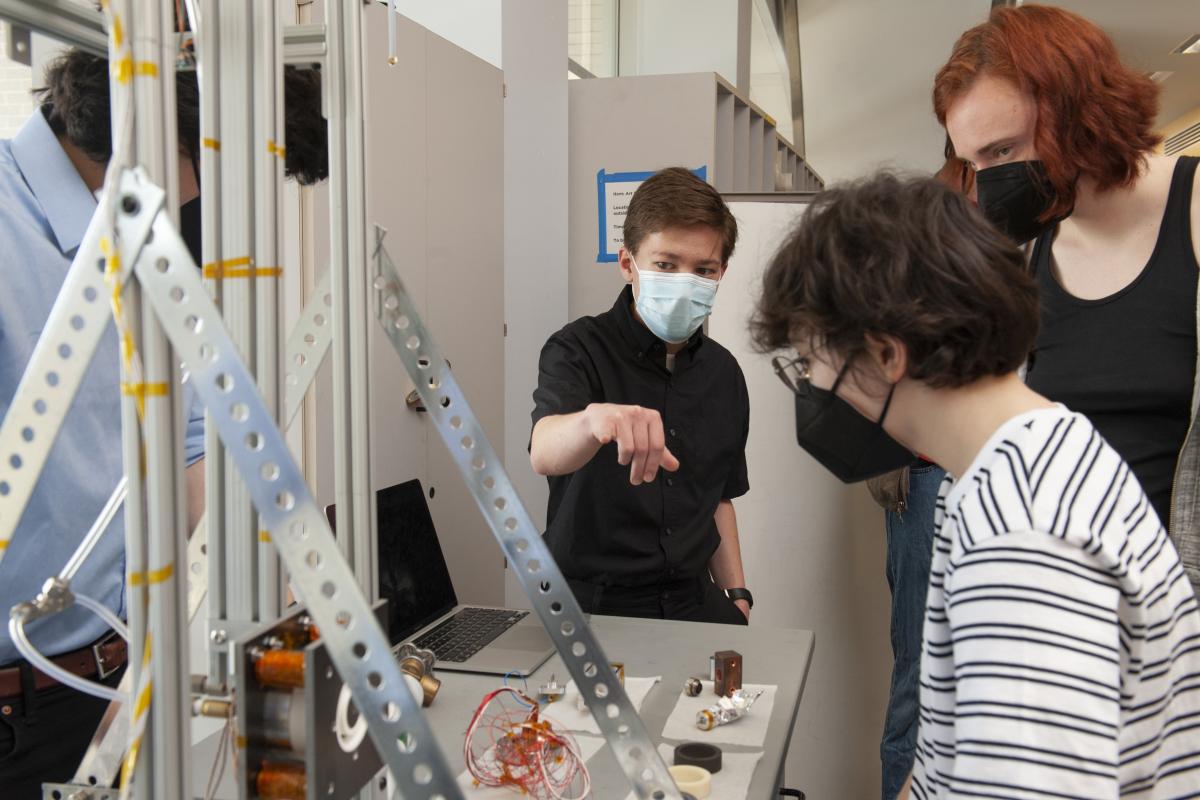 Braden Oh ’23 (center), points to the thruster while interacting with students and members of the Olin community in the Miller Academic Center during Spring Expo 2022. Photo by Leise Jones.

"The efficiency of a rocket is measured by how fast you can send your propellant out the back,” explains Oh.

“Chemical rockets—the traditional skyscrapers of hydrogen that are set on fire—give you lots of thrust for a short time, but the propellant is accelerated to a relatively slow speed. They’re inefficient for use in space because they’re very heavy—they have to carry a bunch of fuel."

“On the flip side are electric propulsion rockets. They take in atoms, give them a charge, and sling them out the back at tens of thousands of meters per second—much faster, much lighter, and much more efficient,” says Oh.

This project began back in 2018; Oh and Lauren Anfenson ’22 were interning at NASA’s Jet Propulsion Laboratory (JPL), and they were introduced to the Hall-effect thruster (HET) alongside Jonah Spicher ’21 and Justin Kunimune ’19.

“After we saw the thruster’s test fire, we all tried to explain to each other how it worked, but we couldn’t,” says Oh. “We decided to learn to build one as part of an independent study that fall.”

The team’s first attempt worked, but not very well—the students could get it to pulse fire, but not to sustain thrust. During the design review for their independent study, Oh and his team got some advice from the board of reviewers on possible tweaks to help improve their HET, including better understanding the physics behind the model’s functionality. 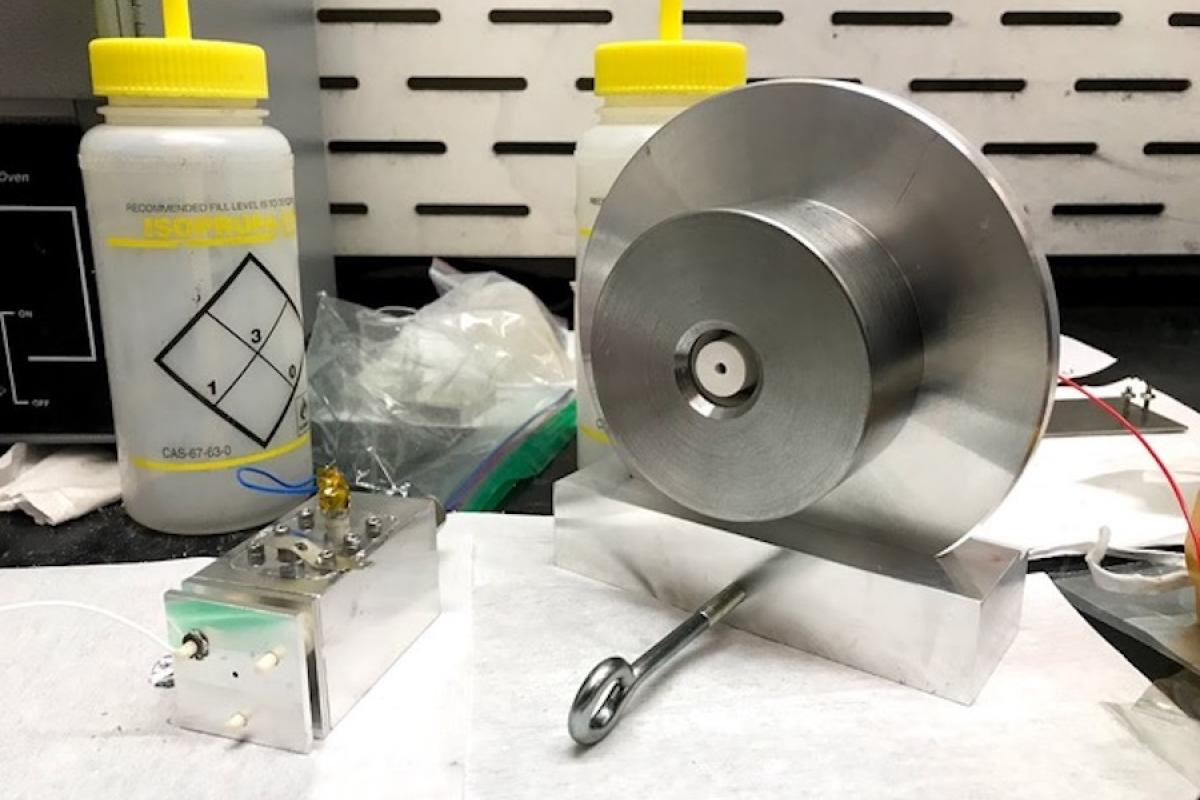 A picture of the team's original thruster built in 2018. "It couldn’t achieve sustained firing, but it demonstrated that we understood enough of the principles to at least accelerate a plasma in the direction we wanted it to go," said Oh '23.

After a pause in progress during the pandemic, Oh restarted his Hall thruster project in earnest in summer of 2021. He brought on board two astrophysics students from Wellesley College (Mahderekal Regassa and Marissa Klein) and one pure physics student from Brandeis University (Albert Countryman) to help bring needed technical depth in areas such as electromagnetic fields, plasmas, and statistical mechanics.

The move paid off—not only has the team created a more advanced version of the technology, but they have also filed a provisional patent for one of their innovations. Their unique, 3D printed diffuser directs streams of their propellant—Krypton gas—in a more efficient way. 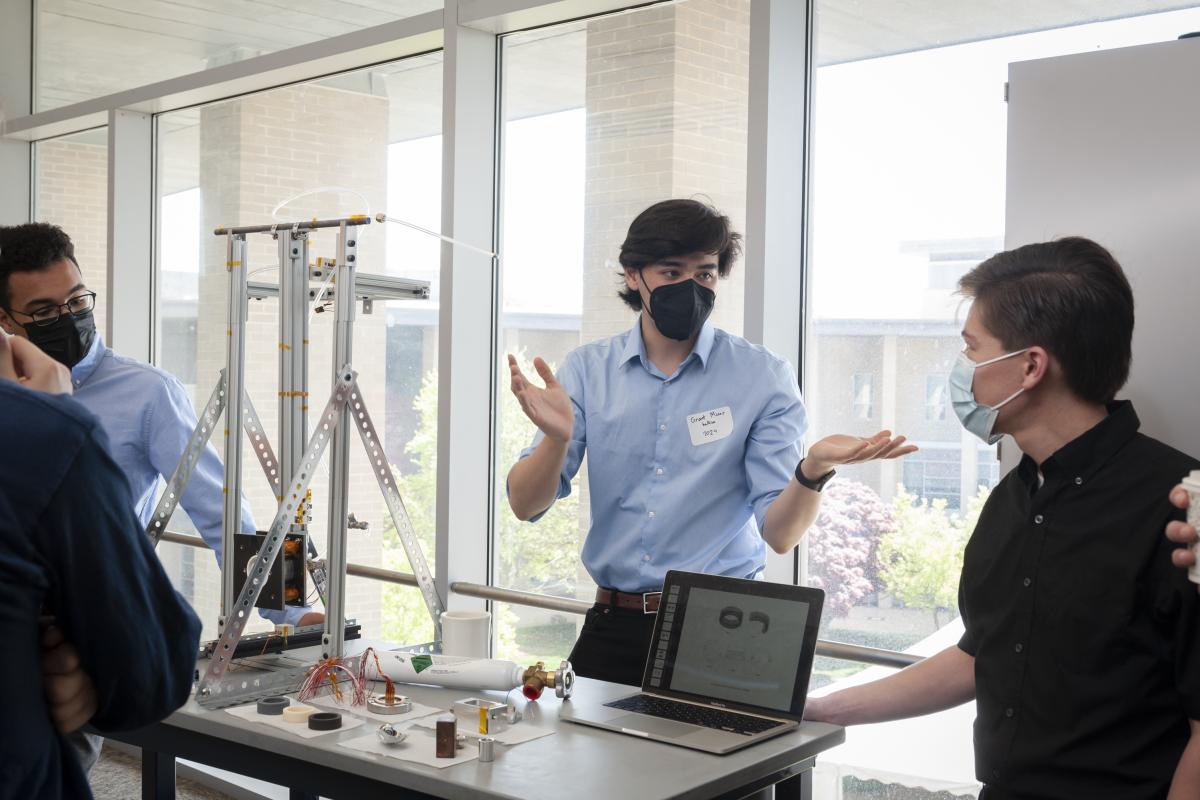 Grant Miner '24 talks with Braden Oh '23, while Avery Clowes '24 looks on, during Spring Expo 2022. The three Oliners are all part of the Hall-effect thruster project team. Photo by Leise Jones.

“Inside the thruster, there is a cylindrical cavity with a metal plate charged to 300 volts at the bottom,” explains Oh. “You introduce plasma into the cylinder, and the huge positive charge at bottom causes atoms to fly out the back. Underneath the metal plate is the diffuser ring, and we realized that by pumping the gas through spirals instead of straight out, the propellant lasts longer in the channel. That increases the chance that the propellant atoms will be ionized by the charge, which in turn increases efficiency.”

Oh and the team designed two different models of the diffuser ring—one made from a high-temperature resin called Somos PerFORM and the other using aluminum laser sintering. They are currently conducting tests on the resin version. 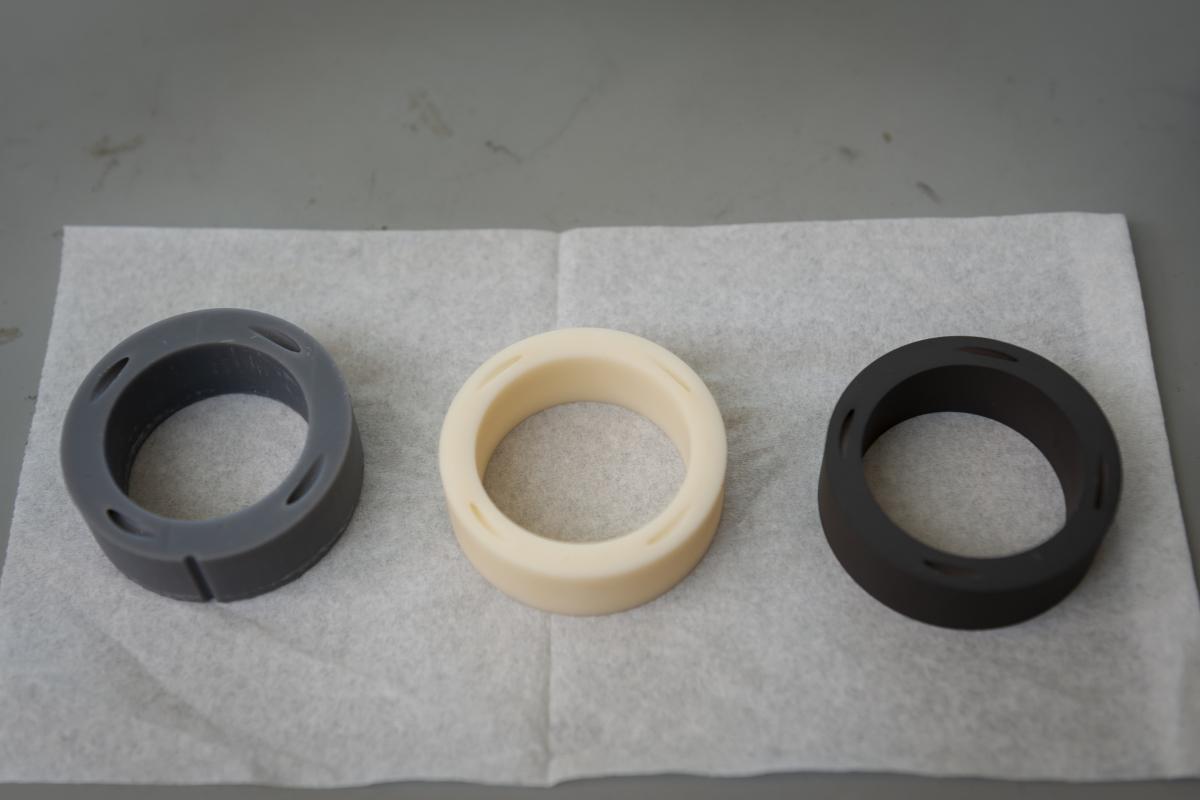 The team's set of diffuser prototypes. According to Oh '23, "the grey one is an early prototype from a low-temperature resin, the white/yellow one is a high temperature resin (called Somos PerFORM) that we integrated into our thruster, and the black is anodized aluminum."

“Now we’re building a better cathode, or plasma igniter, so that we can do a sustained test-fire while measuring the temperature of the diffuser to see if the resin can withstand it,” says Oh. “If it does, we’d like to try 3D printing more parts of the thruster out of PerFORM since it’s both cheaper and safer than some of the other materials we’ve been working with.” 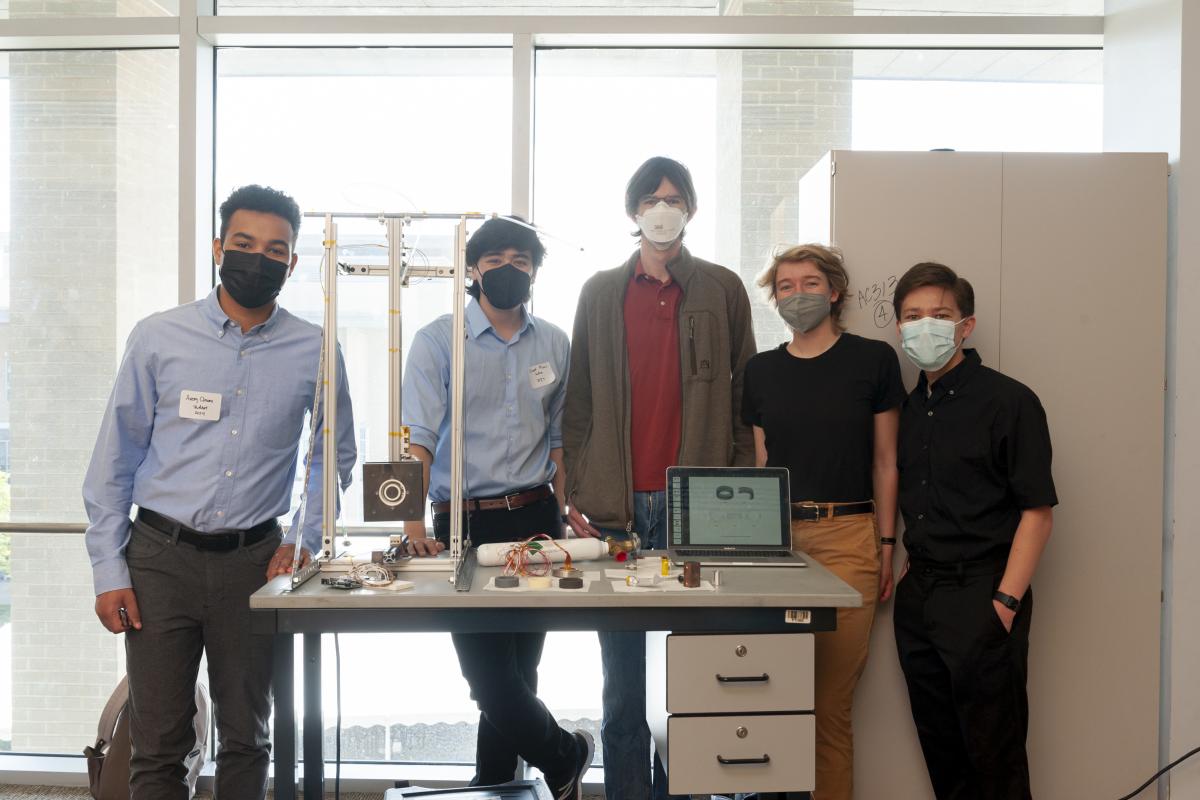 Some of the team pose for a group photo at the Spring Expo 2022 presentation, with thruster and other project parts in foreground. Photo by Leise Jones.

Once the team has more detailed test data and simulations of how the gas distribution occurs, they intend to file a full, non-provisional patent.

With his passion for the human exploration of space, Oh hopes that the expertise he’s gained during this project is a boost for his career, and for the field of aerospace.

“Space is hot right now, with lots of interest in putting up big constellations of satellites that have to be kept in specific places, to building moon bases and sending humans to Mars,” says Oh.

“We need better, more efficient propulsion technology to do all of those things, and I believe that electric propulsion is the way we can sustainably keep people out in space and exploring the universe—both getting them there fast enough and carrying the supplies and cargo they need to succeed.”