A Distinguished Paper Award Means One Giant Leap for Students

Braden Oh and Lauren Anfenson spent the summer after their freshman year at Olin working at a NASA’s Jet Propulsion Laboratory, where they got to see engineers fire a live ion thruster.

They were amazed by this technology, which they’d never seen before, and what it could enable. Because these thrusters are capable of achieving large changes in velocity with much less fuel than a traditional chemical rocket, they open doors to ambitious space missions: allowing spacecrafts to travel far into the deepest parts of the solar system, redirecting asteroids and making the prospect of human space travel beyond our lunar orbit realistic. 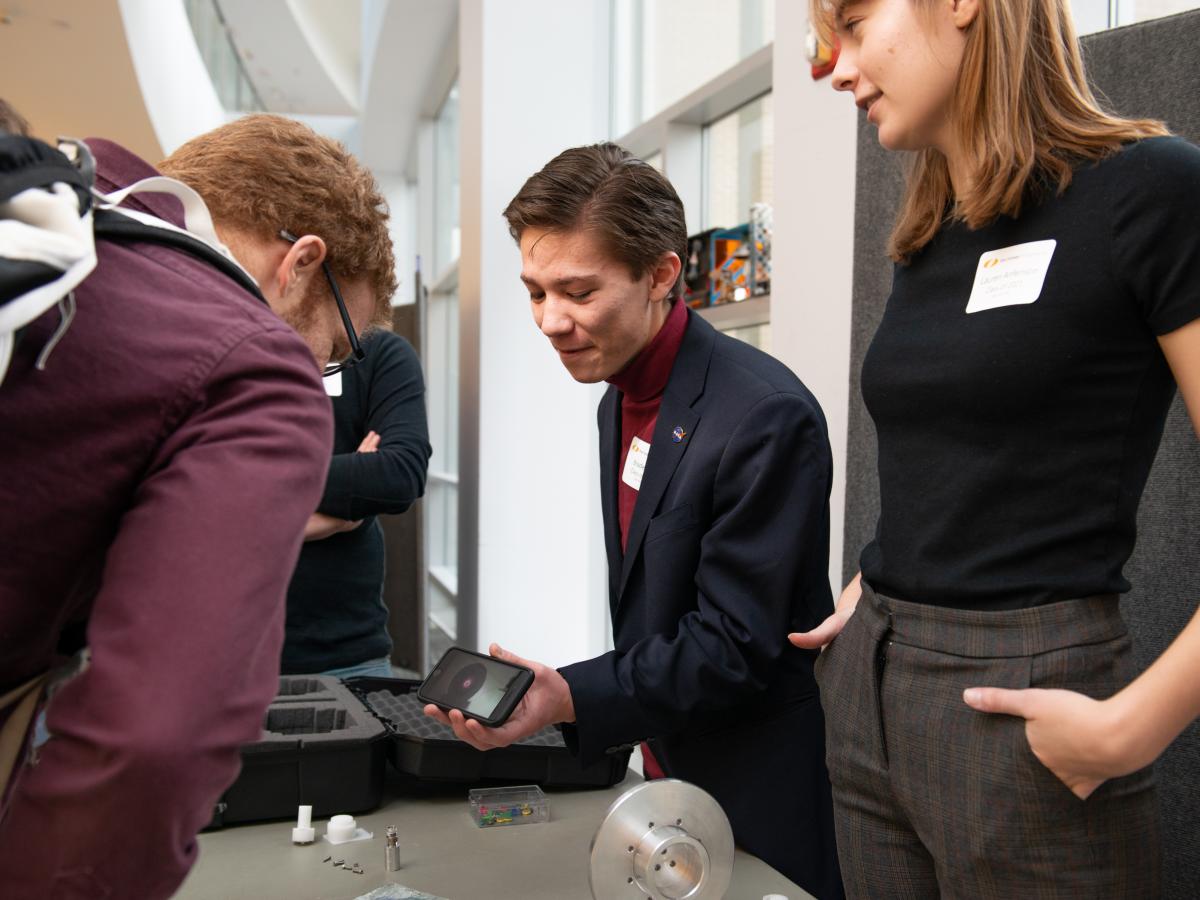 Braden Oh '21 (L) and Lauren Anfenson '22 (R) show a smartphone screen to an attendee in the Academic Center during Expo.

“I always loved space and, in particular, the idea of doing things that have never been done before."

As Oh and Anfenson walked out of the lab, they had the same question: How did the thruster work? They couldn’t explain what they’d seen and they wondered if they could figure it out.

Back on campus, they teamed up with two other students, Jonah Spicher and Justin Kunimune, who were equally enthusiastic about taking on a research project to understand and design a Hall-effect thruster (HET), a type of ion thruster in which the propellant is accelerated by an electric field. All four students had some experience with introductory physics, but none had studied advanced topics relevant to electric propulsion, such as plasma physics. Olin encouraged their project as an independent study and the team got an advisor, Rebecca Christianson, associate professor of Applied Physics. In doing research, they discovered that their project was quite ambitious: It was taken on only by graduate students at just a handful of universities in the country.

Initially, the scope of their project was to take the semester to learn physics principles behind electric propulsion, develop computational modeling skills and apply the theoretical physics to a thruster design. So it came as a surprise that they accomplished these goals with many weeks to spare. This was partly due to the help that the students sought out, including insight from graduate students and professionals. But it was mostly due to the sheer intensity of the students’ motivation to keep learning more and more about this field.

Having built a solid knowledge base, the team was excited to push forward. They took the initiative to actually build the thruster, using tools from the Olin machine shop and supplies mostly donated by external vendors and manufacturers. At the end of the semester, the MIT Space Propulsion Laboratory allowed the team to use its testing facilities. The thruster was placed in a massive vacuum chamber and over three days, they were able to activate it.

“Realizing that we have the capability to start from essentially no knowledge and navigate our way to a firing thruster makes me more confident in my ability to take on other big, overwhelming, tangled-up problems in the future”.

The team was elated about their success and excited to share it, so Christianson encouraged them to write a research paper about their experience. The paper demonstrates that by drawing on the power of student motivation, projects requiring skill sets far beyond those possessed by students at the beginning of a project can be feasible, highly educational—and very rewarding. The students made the case that more substantial portions of undergraduate engineering curriculua could be ceded to student-directed projects that foster excitement about interesting science.

The paper was published in the journal of the American Society for Engineering Education (ASEE). Shortly after presenting the paper, the students learned that the ASEE liked the paper enough to award them the Distinguished Student Paper Award for the aerospace division of ASEE’s 2020 conference. “Publishing a paper for undergraduate research is great, because it makes the boundary of human knowledge feel more accessible,” says Kunimune. “Now I know that I can actually do scientifically novel things, even if what we did was only novel in a very specific way.”

The team hopes to help students and faculty at other colleges feel empowered to use enriching, challenging projects in classrooms that spark their passion. “I think a lot of students fear being stuck in lectures, which can dampen their passion for engineering,” says Oh. “Being able to work on a difficult, self-directed project is exciting and motivating. And being able to work on a something that, in a bigger level, can take people to Mars and send probes out to farthest reaches of the solar system—it’s incredibly inspiring.”