Part of Olin’s DNA: A Celebration of Rick Miller

The entire on-campus community gathered together in the dining hall for a festive celebration of Olin President Rick Miller’s 21-year tenure. The event featured heartfelt tributes, a trivia game, cannoli, an original acapella song and a 18-foot sticky note mural of President Miller himself.

The celebration was a poignant moment in the final months of the academic year as Olin prepares to say farewell to President Miller in June. 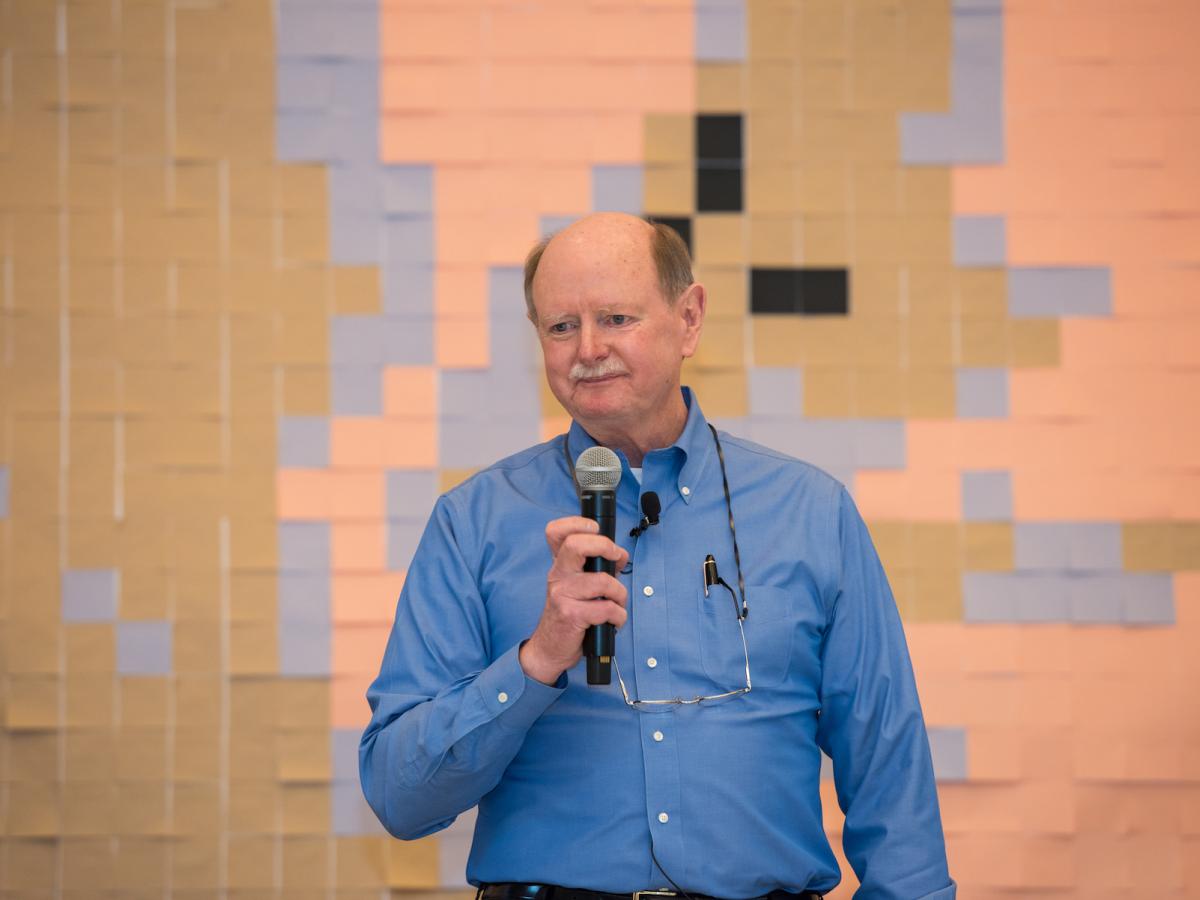 View photos from the event on exposure...

Speakers representing all corners of the Olin community shared what Rick’s leadership and support has meant to them throughout the years. Ben Hill ’07, assistant professor of electrical and computer engineering, tried to put everyone’s feelings into words. “His legacy is secure as part of Olin’s DNA,” he said. “To look at a hole in the ground and say to yourself ‘I can build something here no one has ever seen before,’ and then actually deliver on that promise to create a world-class institution over two decades, requires a special kind of bravery.”

Linda Canavan, associate dean for academic programs and registrar, reflected on what it has been like for her to follow Rick’s leadership since the college’s early days and the many changes Olin has seen throughout the years. “Imagine how things may have been different if Rick had not taken the leap of faith presented to him by the F.W. Olin Foundation? Who knows if we would be recognized worldwide or have over 1000 alums?” she asked. “Beyond all these tangible things, 21 years of Rick’s Presidency has given Olin an ‘essence’ like no other, something that cannot be quantified, something that has meaning and can only be experienced.”

Annie Kroo ’20 spoke about her appreciation of “Olin’s underlying value of humility, which I believe makes us more open to receiving feedback and more willing to focus on community instead of hierarchy.” This is a value she believes Olin learned from Rick, and something that makes the college more unique than its curriculum. Over the many interactions she’s had with Rick, from ice cream socials to academic colloquiums, “I have come to respect Rick as our president, as a global thinker and innovator, and most especially as a humble guy who thinks talking with a student about anything for two hours is more than worth his time.”

Lynn Andrea Stein, professor of computer and cognitive science, listed the many hats Rick has worn over the years, and noted that the most important role of all has been that of teacher. Olin has benefited from a leader who is, first and foremost, a teacher, she said. “I think on that first day, when Rick discerned what it was that we might need as a college, and then recognized that what we needed even more than the answer was to learn for ourselves. In that moment, Rick became the kind of teacher we hope Olin is within our community, and he showed us through his example how to teach by scaffolding the learning of others.”

Sally Phelps, director of post-graduate planning, spoke of President Miller’s generosity with his time, his network, his knowledge and his experience. “Any time anyone on my team has needed support, the president of this college–who had been flying all over the world giving talks to important academics and business leaders—always made time for us, our students and our alumni. ‘How can I help?’ he would ask, often in an email sent in the middle of the night,” she said. “Rick, since the beginning, you have been there for us, quiet, humble, yet steady and strong. Professionally and personally, you have been a rock for so many of us.”

Mark Somerville, interim provost, dean of faculty and professor of electrical engineering, made the humorous comparison of Rick’s relationship with Olin to that of parent and child. “At times, you’ve done the embarrassing things every dad does,” he joked. “You’ve embarrassed us at home and around the world with stories about how exceptional the faculty, students, and staff at Olin are. And in so doing, you’ve built Olin’s reputation to an enviable level.”

Somerville also noted that Rick has also taught Olin “the same lessons, with the same stories from Iowa and California, more than a few times. They are good lessons, even if we rolled our eyes sometimes.” And, like all good parents, “you’ve stepped in when you needed to, but you’ve also given Olin room to grow. You trusted all of us, which has allowed us to achieve the amazing things we’ve done,” he said. “Most importantly, you’ve always been there for Olin, and your love for the institution and the people who make it up has always been evident.”

Evan Cusato ’20 lauded the way Rick would truly listen to students. He told the story of how, several years ago, Rick paused a renovation project because of concerns raised by Evan and a team of student designers. “Our meeting was essentially akin to a first-year engineer walking up to the chief and saying ‘we need to stop all this. We built the airplane wrong and nobody else knows but me,’” said Evan. “Nonetheless, Rick trusted and respected us enough to sit down with us and listen with a genuine desire to understand.”

“People in that position rarely listen to people like us, and it almost never leads to that bold of a commitment. Except here, and I attribute that in no small part to Rick and the culture that his leadership style has inspired,” said Evan.

In a touching moment, President Miller took to the stage and addressed the crowd. “I can never than you enough for your kind recognition, although I know that we made it here today because of you, not me,” he said. “None of us could ever have imagined that Olin would become the global beacon for educational innovation that it is today—and the special community of thought leaders, risk-takers, and brilliant pioneers that it is now. You have exceeded my expectations in every dimension, and by orders of magnitude—THANK YOU—I am so proud of you!”

President Miller also thanked his wife, Beth, for supporting him through the years of his presidency, and his two daughters, Kate and Julia, who partially grew up in the Olin president’s house. “I am truly the luckiest guy in the world!” he said. The Millers will look forward to celebrating their 49th wedding anniversary less than two weeks after his Olin tenure comes to a close and will enjoy his first sabbatical in over 45 years in academia.

Katarina Gosbee ’22, Megan Ku ’22 and Dieter Brehm ’22 presented a framed puzzle to Rick, which was a playful reference to the movie posters of Olin’s early years. It reads, “Olin College: The Engineer Strikes Back,” and is signed by every current student at the college.

Olin College: The Engineer Strikes Back

A snippet of the framed puzzle given to Rick, which was signed by every current student at Olin. 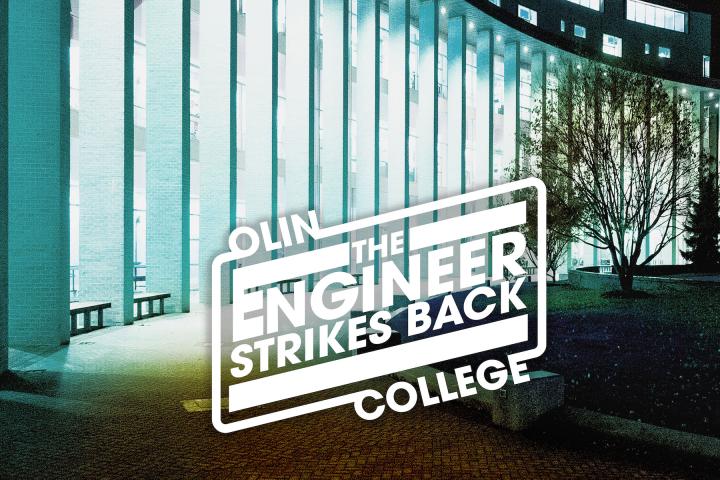 To close out the celebration, all attendees crammed into a big group photo with President Miller and his family, and enjoyed a sweet bite of cake that was decorated with the words, “Thank you employee #1.”