Student ham radio enthusiasts use their engineering knowledge to communicate globally and lend a hand locally.

On the evening of July 12, a group of Olin students clustered around two handheld radios and antennae, using their burgeoning amateur (or ham) radio skills to track the International Space Station (ISS) as it flew over campus. This challenging process allowed the students—many of whom are licensed ham radio operators—to use the ISS to communicate with fellow enthusiasts around the world.

Regan Mah ’23, a member of the Olin Collegiate Amateur Radio Club (OCARC), was one of the lucky group.

“I joined OCARC my first semester freshman year,” recalls Mah. “We worked on building and testing radio antennae—I didn’t have any expertise in that area, but Olin has this great policy on just getting out there and trying new things. If you just jump in, you find that people will help you learn along the way.”

By her second semester, Mah was working with Lohmeyer’s OSSTP Group to lead the  design and development of the ground station. The team is currently in the process of completing the receiving side, which will hopefully be installed on the roof of the Academic Center by the end of the calendar year.

“We’ll be able to use the ground station for amateur radio, and to transmit commands and receive telemetry and payload data from the SWARM-Ex satellites, as well as other satellites,” says Mah.

Meanwhile, Mah and her friends at OCARC have also been busy fine-tuning their ham radio skills and taking their licensing exams to become entry-level, Technician class operators. 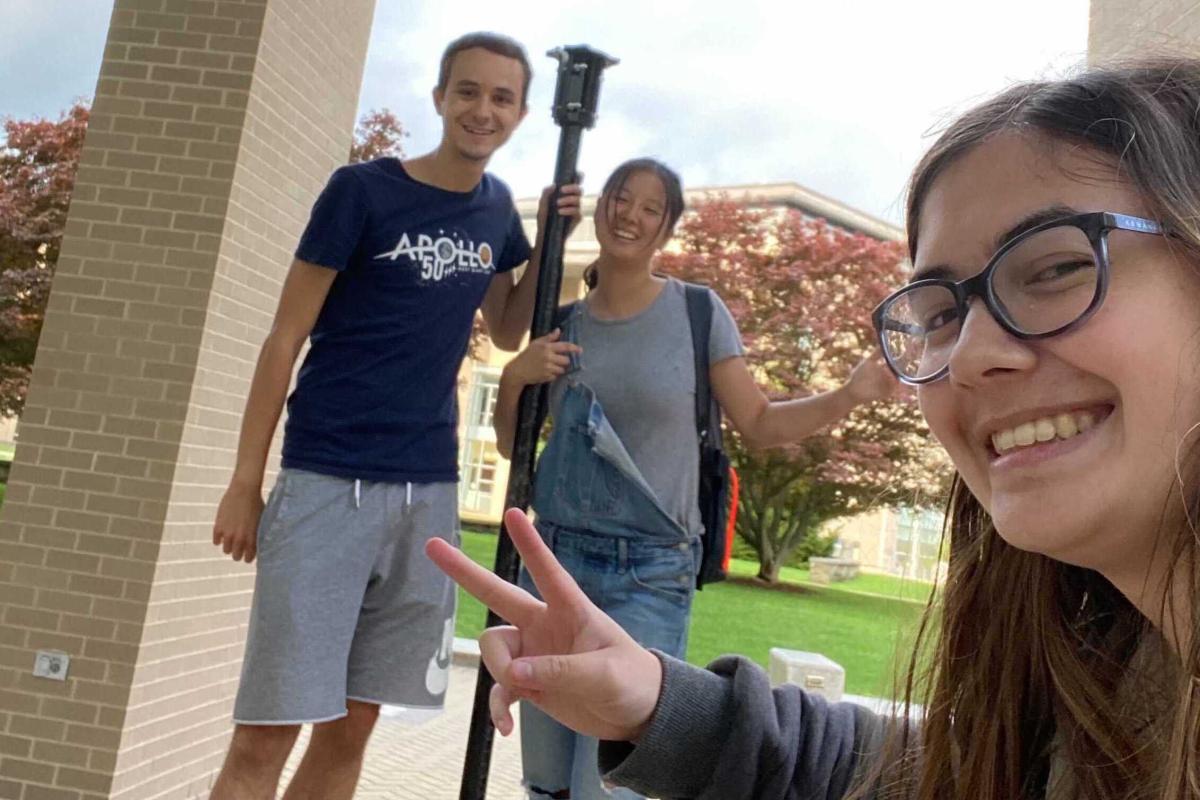 Regan Mah '23 and members of the Olin Collegiate Amateur Radio Club (OCARC) take a selfie together.

By this summer, enough OCARC and OSSTP students had gathered expertise that they consulted the Radio Amateur Satellite Corporation (AMSAT) website to plan how to track the ISS. Using input like the latitude and longitude of campus, the azimuth of the signal, and the maximum elevation point of their antenna, the students were able to calculate exactly when and where to access the ISS repeater to communicate with other ham radio operators around the world.

“Amateur radio takes time to learn, and we had to practice a lot,” says Mah. “Even after you receive your license and your call sign, you still feel a little underexperienced because people have been doing this for years. It was really cool to hear all of the people using the ISS that night—even as far away as Costa Rica!”

As for continuing to work on their ham radio prowess, Mah, her friends, and Lohmeyer will volunteer their services during the 2021 Boston Marathon in October.

“Amateur radio networks are really important, because they can quickly be established during emergencies, when traditional terrestrial communication networks  are down,” says Mah. “During the Marathon, we’ll be using our radios to communicate emergency and routine messages during the race, helping to make sure it’s a safe day for everyone.”