The Art of Saying “No”: Design Refusal

A new tide in engineering education is rising at Olin College: the concept of “design refusal,” or deciding as engineers not to undertake projects or build technologies that may cause harm to the public.

The idea surfaced in fall 2019 when a group of Olin students in PInT, a student-led public interest technology project team were consulting for an anti-human trafficking nonprofit.

“The organization proposed a potential tool for us to build that they believed would be useful for their work: a web scraper to scrape escort sites for ads where the posters could be potential victims of human trafficking,” says Shreya Chowdhary ’22, one of the students in the group, as well as a co-founder of PInT. “They had been scraping ads manually for over a year with some success, and they hoped that automation would allow them to identify and rescue more victims.”

The team of students diligently got to work, until their advisor, Erhardt Graeff, assistant professor of social and computer science, raised some important—and uncomfortable—questions. He pointed out that the tool could potentially be used to collect data on voluntary sex workers without their consent and disseminate it to law enforcement partners. 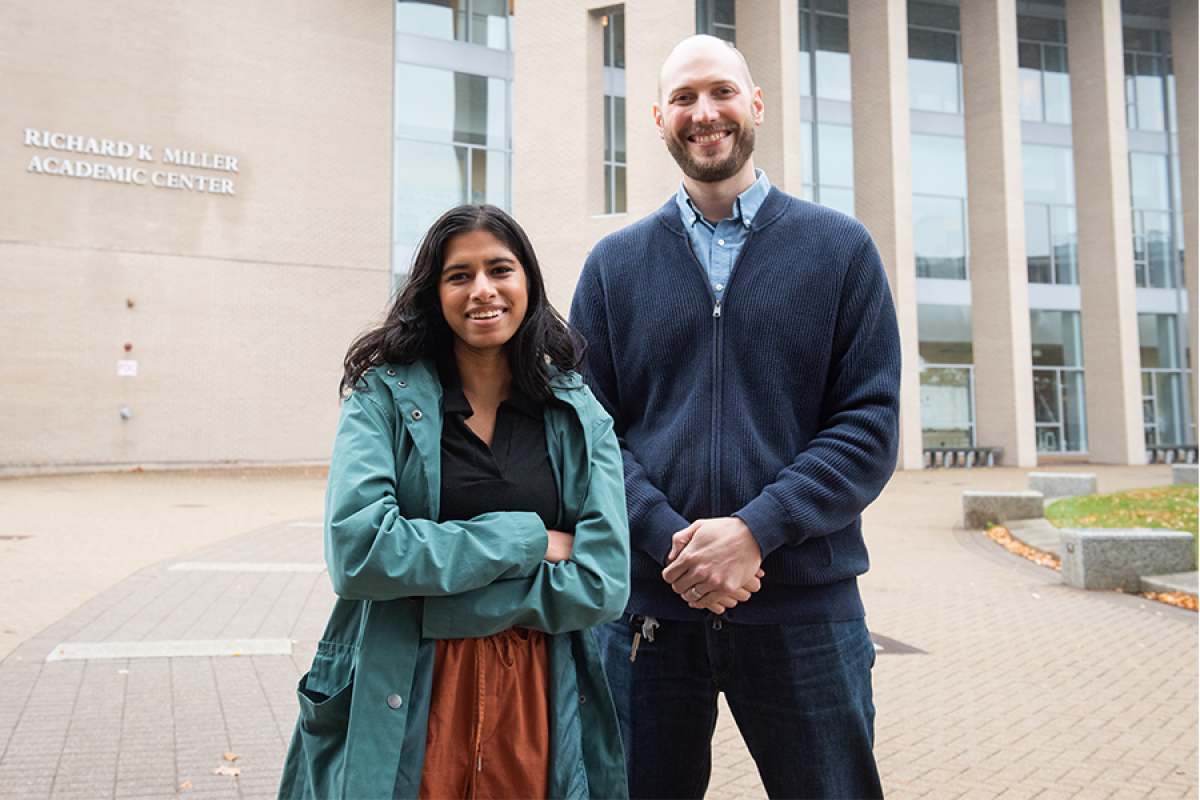 Erhardt Graeff, assistant professor of social and computer science, and Shreya Chowdhary ’22, stand on the Oval in 2021 with the Miller Academic Center (MAC) in background.

Chowdhary and her team began a deeper conversation with the nonprofit about how they would ensure that voluntary sex workers wouldn’t be endangered by their proposed web scraper. They also engaged an expert in tech-based interventions to human trafficking to better understand the larger system in which this tool could potentially be working.

“This expert described the problematic ways police treat both victims and voluntary sex workers and the history of harm created by policing digital sex work,” says Chowdhary. “What struck me most was the way she drew attention to the fact that our partner organization had no representation of survivors or connection to survivor or advocacy groups.”

After a series of discussions with the nonprofit to try to make the tool less potentially harmful to voluntary sex workers—and much personal and professional deliberation amongst themselves—the students decided that they could not move forward with the project.

“We realized that we could not negotiate with or compromise on our values,” says Chowdhary. “We weren’t willing to accept ‘minimal’ harm when we were committed to doing no harm. This was a red line we would not cross. So instead, we took a more assertive position: we would not build, under any circumstances. Full stop.”

Design Refusal in the Classroom

Graeff had been aware of the concept of refusal within political action. History has many examples of groups who have no power asserting themselves through collective action by refusing to do something leaders want them to do: Think of peasants refusing to till the fields, or factory workers boycotting their jobs until they receive better treatment.

But it wasn’t until Graeff had two student groups in the same year—one of them being Chowdhary’s—refuse to do a project that he began to see the interesting role that engineers can play in making sure something harmful doesn’t get built.

“By default, we teach engineering design as a process by which we take our expert knowledge and create solutions to someone’s problem,” says Graeff. “We don’t often think about the idea itself, and that maybe we just shouldn’t build the thing at all. This is a new way to consider the politics of design, who has a voice in a project, and understanding those connections as motivation for design refusal.”

“We don’t often think about the idea itself, and that maybe we just shouldn’t build the thing at all. This is a new way to consider the politics of design, who has a voice in a project, and understanding those connections as motivation for design refusal.”

With this new concept gaining ground, Graeff and Chowdhary have been working together over the past year on how they can bring design refusal into the classroom as a part of engineering pedagogy. Two of the core concepts are things that Graeff—and, in fact, many professors at Olin—use in their own classes already.

"Epistemic humility—the need to have some humbleness about the limits of what you can do as an engineer with your knowledge and skills—is key,” says Graeff. “Engineers need to know when something is a straightforward engineering problem versus a messier, more multi-disciplinary one.”

The second core concept is civic professionalism, or the understanding that all fields—from nursing to communications to engineering—should make professional decisions with the good of society in mind. 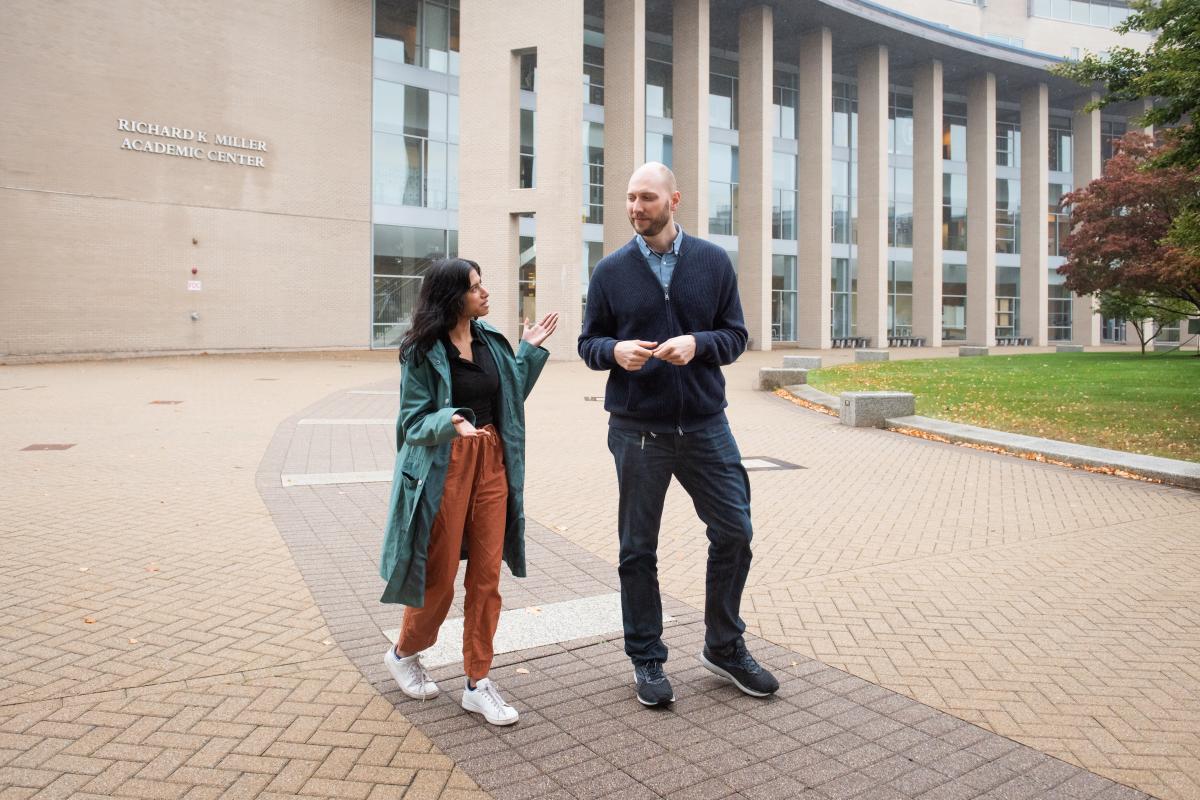 “This kind of civic responsibility sees all voices at the table as equal in terms of power, and it facilitates the decision-making process by involving more people and more diverse points of view instead of a mighty few,” explains Graeff. “I teach this as part of my classes at Olin: People have a responsibility to people, and that transforms how students use their expertise, to the point that we can now be open to the idea that we can’t or shouldn’t build something.”

“Our ultimate goal with creating this pedagogy is to teach students how to refuse, but part of that is defining that process,” says Chowdhary. “What questions do engineers ask themselves? How do you decide when to refuse? This is uncharted territory, but we want to create space in the design process for refusal, as well as help students back up a step to question the foundational assumption that everything should be built.”

“What questions do engineers ask themselves? How do you decide when to refuse? This is uncharted territory, but we want to create space in the design process for refusal, as well as help students back up a step to question the foundational assumption that everything should be built.”

For Graeff, there is no better place than Olin for this kind of shift in fundamental thinking.

“What attracted me to Olin as a faculty member in the first place is the idea that we have an expectation built into the mission that we’re transforming the field of engineering and engineering education,” says Graeff. “I take that responsibility seriously, and with design refusal, we’re thinking of what the future of engineering should be: pushing back on the culture and tradition as it stands now and looking for better ways to do things.”