Experts say the discovery of Earthbound asteroids and comets needs improvement; too many satellites could prevent discovery 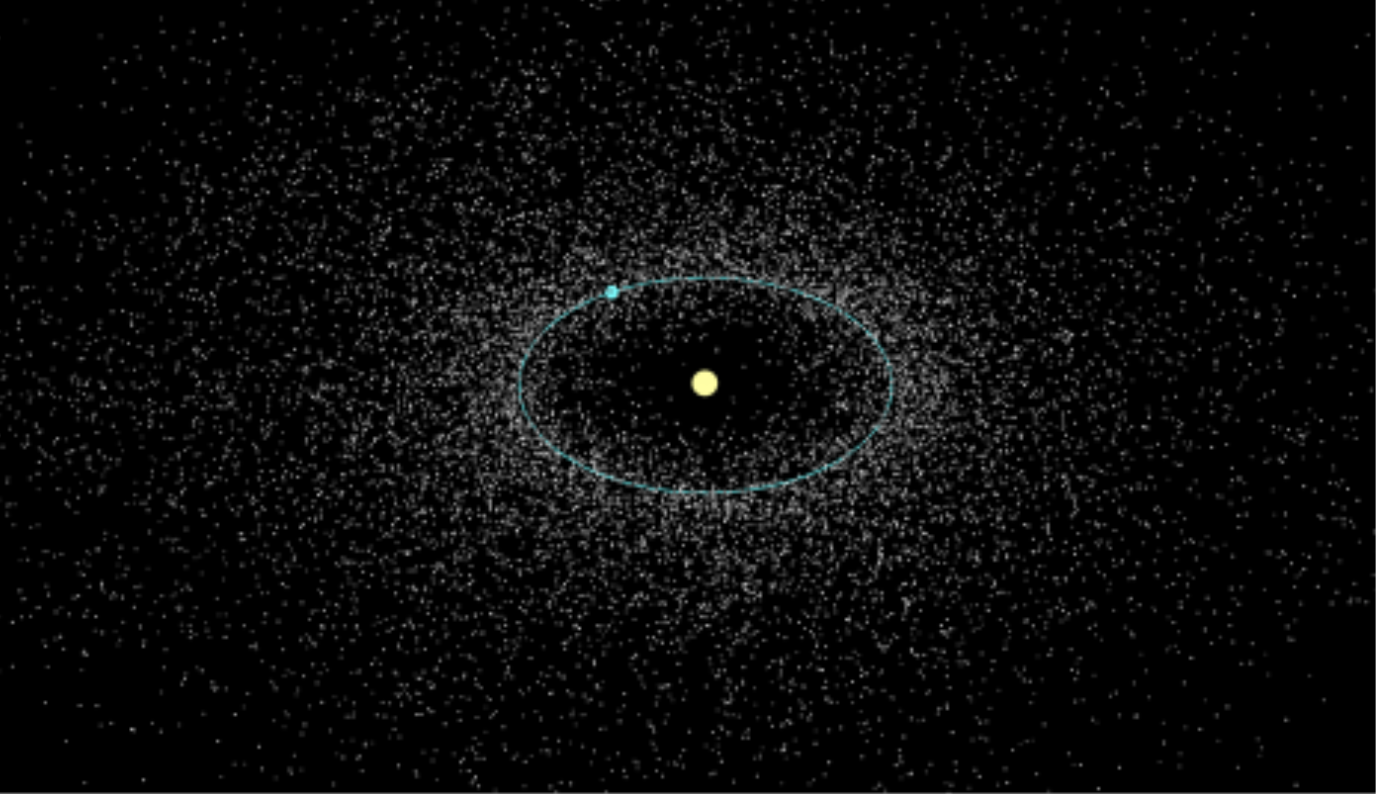 Caption: The Earth (blue) orbits the sun (yellow) on an elliptical path (blue), surrounded by near-Earth asteroids (gray). Image is not to scale. Copyright: Carrie Nugent, Olin College of Engineering.

Experts say the discovery of Earthbound asteroids and comets needs improvement; too many satellites could prevent discovery

Needham, MA and New York, NY (Aug. 29, 2022, noon EDT)—A recent survey of planetary defense experts – those who find, track, and study asteroids and comets that could prove dangerous to our planet – shows the discovery of these objects needs improvement. The survey also found experts thought that we would be unlikely to deflect a large asteroid or comet with just five years' notice, although they stressed that the likelihood of such an object impacting Earth was very low.

“With five years warning, experts thought we had a decent chance of stopping a medium asteroid or comet, but a poor chance of stopping the type of large asteroid or comet – more than half a mile long – that would actually do the most damage,” said Chris Said of Apollo Academic Surveys, a non-profit surveying and aggregating the views of academic experts for dissemination to the public.

“Early warning is key, and five years is not a lot of time. If we know something is headed towards Earth, we want enough notice to do something about it,” said Carrie Nugent, associate professor of Computational Physics and Planetary Science at Olin College of Engineering. “The one thing planetary defense experts said they wished more people knew was that with enough warning, an asteroid impact could be prevented.”

Respondents said that a large asteroid or comet might impact Earth every 550,000 years, on average.

The planetary defense experts also expressed concern that the rapidly growing number of commercial satellites in near-Earth orbit could interfere with discovery efforts. Satellites can block asteroid observations. In a worst-case scenario, space could become crowded with satellites and debris, leading to a chain reaction of collisions called the Kessler syndrome, that could render near-Earth space unusable.

Today, NASA planned to launch Artemis 1, a mission with work that includes testing CubeSats as deep-space probes, including one to look closely at an asteroid. In addition, on September 26, NASA’s DART spacecraft is expected to collide with an asteroid named Dimorphos. This will be the first mission to test asteroid deflection technologies.

Currently, there are no national or international regulations to limit the number of satellites and only slight regulations about space junk. The dark night sky, unlike other parts of the environment, is not protected as a natural resource despite being important for scientific purposes, religious and cultural purposes, and individual enjoyment.

Additional highlights of the survey, and full survey results, are available here.

About Olin College of Engineering

Founded in 1997, Olin is ranked among the top-three undergraduate engineering programs in the country by U.S. News & World Report. Olin prepares students to envision, create and deliver products, services, and systems that transform and improve people’s lives around the world. By challenging norms and sharing its unique approach to education, Olin is revolutionizing the way engineers are taught. Learn more at Olin.edu

Apollo Academic Surveys was founded in 2022 to aggregate the views of academic experts on topics of wide-ranging importance. The surveys are designed to provide insight to the public and to experts about the degree of scientific consensus. Survey results are freely available to all. Apollo is funded by the FTX Future Fund.