Growing the Future of Farming

Two Olin alumni are using their knack for technological innovation and careful problem-solving to increase yield and sustainability on their Midwestern family farm.

Clark McPheeters ’09 grew up on a farm in Gothenburg, Nebraska, where he and his ancestors have farmed for six generations. The current farm was founded by his great-grandfather who settled there as he moved west building telegraph lines for the Union Pacific railroad in the 1910s. 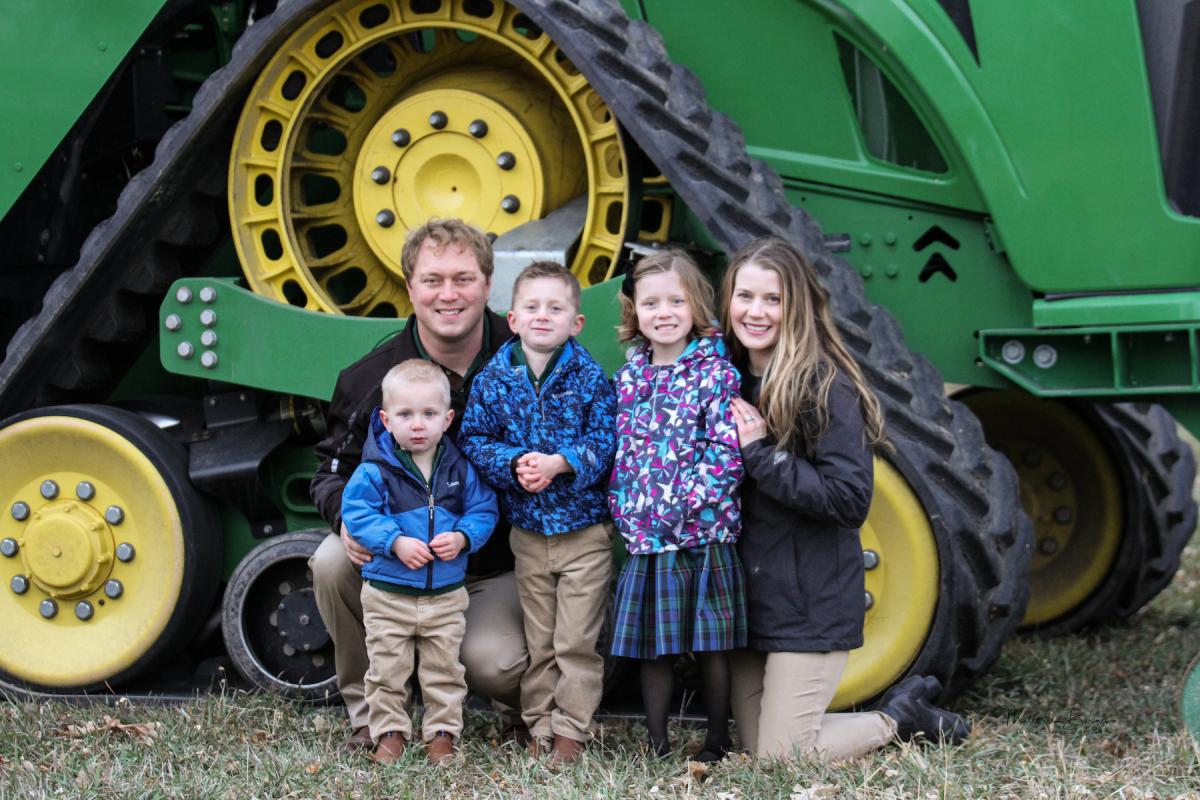 Clark McPheeters ’09 and Bryn (Hollen) McPheeters ’09 are bringing engineering to agriculture on 7,000 acres of corn, soybeans, alfalfa, and native prairie rangeland in Nebraska. Pictured - Clark and Bryn on their farm with their three children.

Clark first discovered Olin when visiting family members in Wellesley for Thanksgiving as a sophomore in high school.

“Many engineers know their intended career path as early as junior high,” says Clark. “I scored well in math and science, and I liked engaging in critical thinking and problem-solving, so engineering seemed like a natural fit. I’ve always been a futurist and I get excited thinking about the next technology we can develop.”

Bryn (Hollen) McPheeters ’09 also knew for a long time that she wanted to be an engineer, in part because of her parents’ influence.

“My dad was an aviation electronics technician in the U.S. Navy and is a senior product marketing engineer for Veeco, and my mom was a paralegal and worked in the medical field, so I grew up learning how things work and problem-solving with my parents,” says Bryn. “Using engineering to make the world a better place is a passion of mine.”

The two met and married while studying at Olin, and they spent several years in the region as Bryn put her concentration in materials science to work for Giner Labs. She helped develop a state-of-the-art vapor-feed electrolyzer stack for aerospace applications that utilizes a water management membrane. The stack produces oxygen gas that does not need to be separated from liquid water, which dramatically reduces the weight, power requirements, and complexity of the life support system. Her contributions are now at work creating oxygen for astronauts in the International Space Station.

The McPheeters then decided to move back to Clark’s family farm to work alongside his grandfather, brother, and dad. Their farm produces food grade corn used in tortilla chips as well as soybeans and alfalfa for livestock feed. They also manage several thousand acres of native prairie grass that they lease for cattle production.

The McPheeters’ farm has a number of technological advancements in place, including a center-pivot system with moisture-sensing soil probes to irrigate fields more efficiently, as well as satellite and drone imagery to monitor crop growth.

“Bryn and I just completed our 11th season of farming, and every year brings a new set of challenges, but that is what keeps us invested,” says Clark. “The innovations we’ve instated have increased our output while also conserving irrigation water and other resources.”

One of Clark’s favorite enhancements is a strip-till “dream” machine that he envisioned and built out of components acquired from several different suppliers. This technology combines a tillage pass with two different fertilizer applications to increase operational efficiency. In just one pass over the field, the machine prepares the seedbed for planting and applies multiple nutrients in a concentrated band, maximizing uptake by the crop. 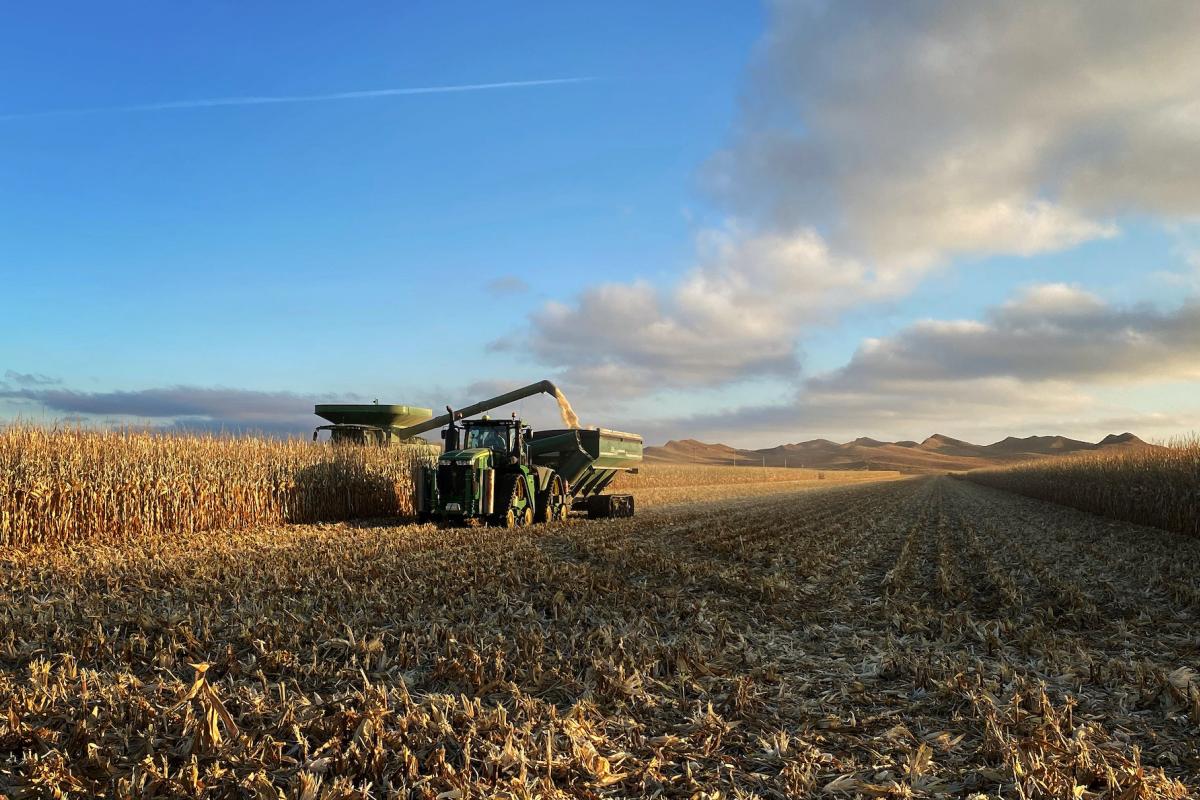 A piece of the McPheeter's machinery runs on the farm in a field draped in shadow and clouds.

“Each field is divided into smaller subzones that are created based on soils maps, harvest yield maps, and grid pattern nutrient sampling performed annually,” Clark continues. “We use georeferenced variable-rate application maps to apply the optimum amount of each input in each zone.”

These technologies use the Global Navigation Satellite System (GNSS), which also allows the McPheeters to utilize sub-inch accuracy autosteering on their equipment to ensure that planted seeds are precisely placed in the tilled strips.

With these innovations, the McPheeters have successfully increased their harvested yields while using the same amount of seed and fertilizer for a better return on investment.

The McPheeters are happy to be able to use their technological know-how to improve their family farm, which has changed enormously from its start more than a century ago when the big innovations were tractors that replaced horses and a windmill-powered generator that charged batteries for DC electric lighting until the Rural Electrification Act of 1935.

“An important part of farming is being good stewards of all our resources—land, water, air, seed, fertilizer, labor, everything,” says Clark. “The future of agriculture will be shaped by technology such as fully autonomous equipment and improved weather modeling resulting from advancements in artificial intelligence. We will be able to observe, analyze, and tailor our practices for each one of the millions of plants we cultivate and harvest each year on our farm. The foundational technologies necessary to achieve this level of management already exist—now we just need bright minds to assemble them into a next-generation farming system at a cost that delivers return on investment for farmers.”