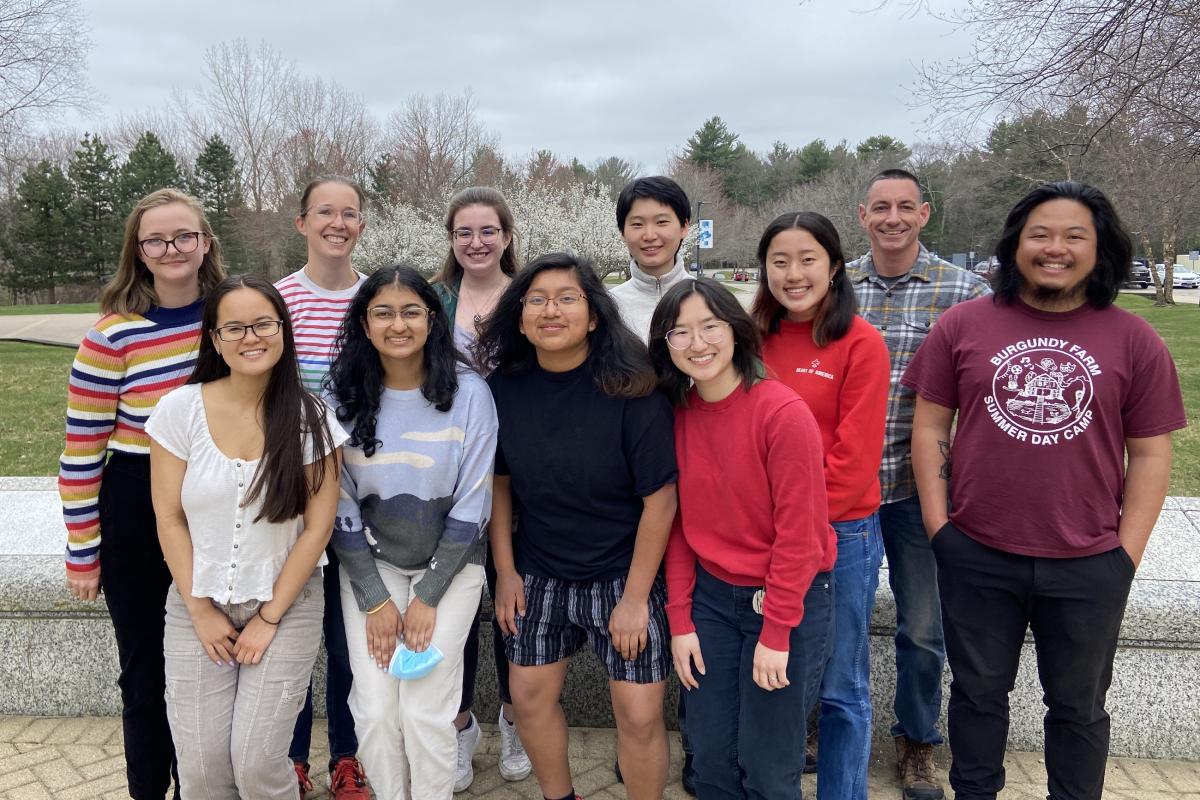 The competition, sponsored by the Bureau of Reclamation, challenged the public to develop innovative solutions to reduce by-products that require additional treatment and disposal and to increase freshwater supplies from inland desalination plants. The Olin/Harmony/MIT team's winning solution uses batch reverse osmosis (RO) with a flexible bladder. This device operates in short cycles that are too brief to allow crystals to form on the reverse osmosis (RO) membranes, thus enabling treatment of much more contaminated waters than usually can be processed with RO.

“Developing this technology has been a dream of mine for several years,” says Tow. “We’re operating reverse osmosis in a unique way—by treating wastewater in short batches, we can extract clean water using minimal energy and without allowing salts to damage the membranes.” 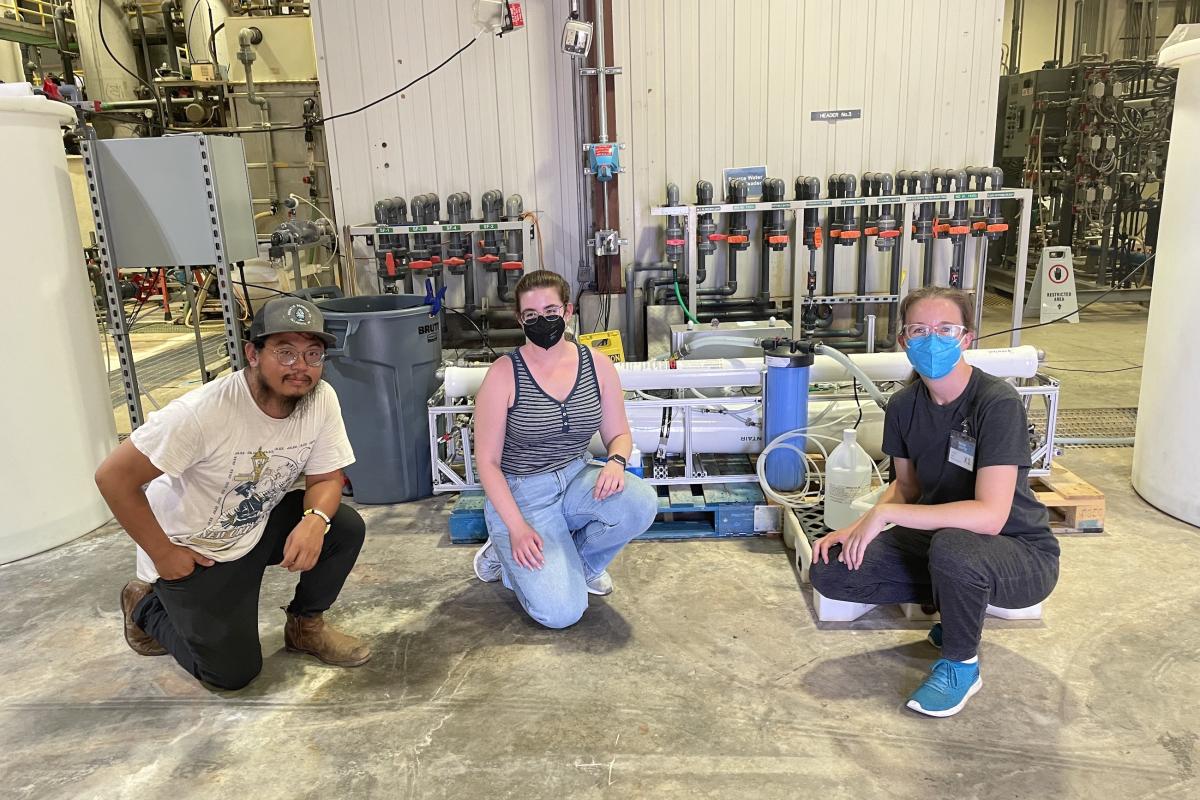 This prize is the culmination of a yearlong process. Last year, Tow learned the team was one of five finalists in the competition, and they received $115,000 to design and build a functional prototype at Olin. The team's proposal was written by Tow and Quantum Wei (from the startup Harmony Desalting) in collaboration with MIT Prof. John H. Lienhard V. U.S. Coast Guard Academy Prof. Michael Plumley CAPT joined the team and spent part of his sabbatical at Olin setting up the instrumentation. Eight Olin students—Audrey Abraham ’24, Kei Chua ’23, Jiayuan Liu ’25, Diana Garcia ’25, Anna Letcher Hartman ’22, Natsuki Sacks ’25, Adhishri Hande ’25, and Lily Jiang ’25—contributed to water chemistry modeling, bladder design, fabrication, and testing of the system.

“Throughout last year, I worked on fabricating fittings and assembling parts of the system. I also spent a lot of time doing last-minute troubleshooting and operating the system at the plant. During the competition, I was able to meet people working for the desalination plant and members of other teams. It was an amazing opportunity to learn about different reverse osmosis methods and see water desalination on a larger scale,” said Abraham ’24.

“Winning the competition was a wonderful validation of all our hard work.”

Tow, Wei, and Abraham ran the prototype at Reclamation’s Water Quality Improvement Center at the Yuma Desalting Plant 24 hours a day for a week this July. It took in part of the plant’s salty waste stream and recovered more than 82% (8,800 gallons) as drinking-quality water. 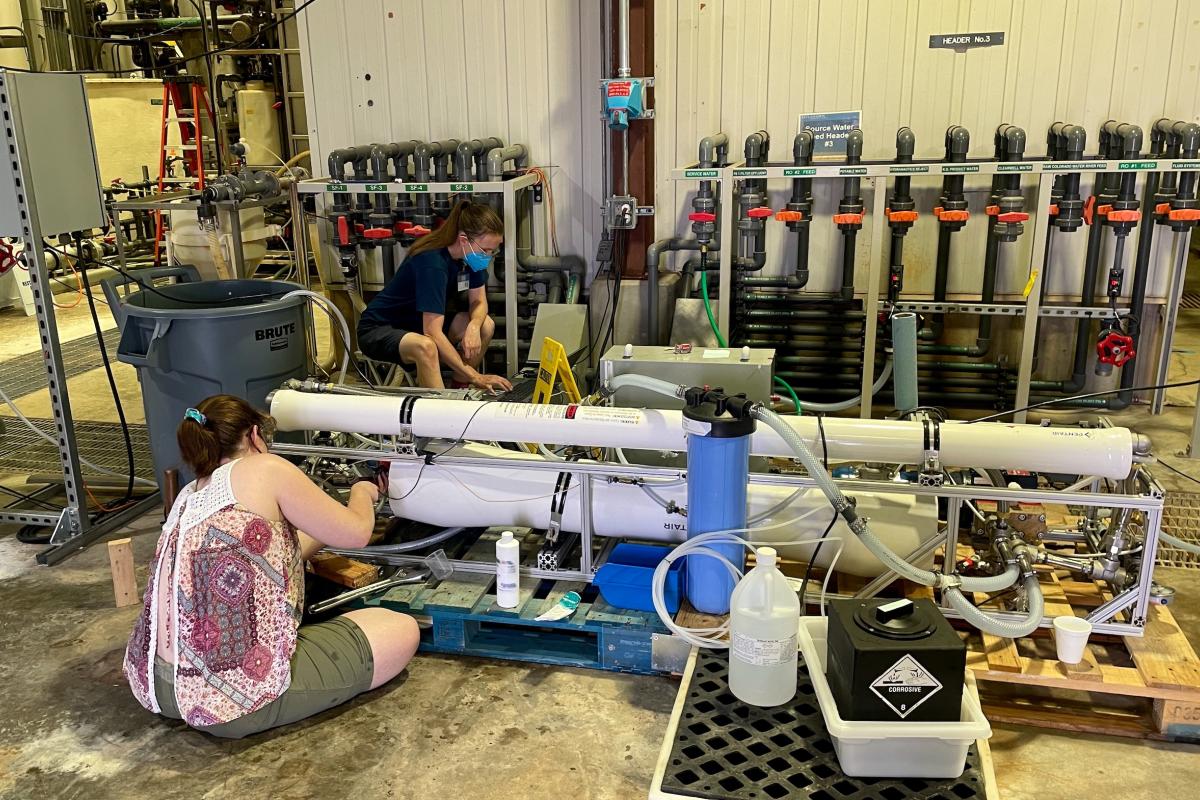 Professor Emily Tow and Audrey Abraham '24 are seen in June taking in the concentrated waste stream from the Yuma Desalting Plant and recovering 80% of it as drinkable water. Their prototype purifies 50 gallons of water per hour using only 500 W of electricity.

A key component of the team’s batch RO system is a flexible bladder that allows the shrinking batch of saltwater to stay pressurized while fresh water is produced. The bladder was codesigned by Chua ’22 and Tow, who drew on their sewing expertise to create this custom part out of waterproof fabric.

The $825,000 “More Water Less Concentrate” competition launched in October 2020 to support development of innovative, affordable, and environmentally sound solutions to reduce the volume of concentrate in water and generate more usable water from inland desalination plants. 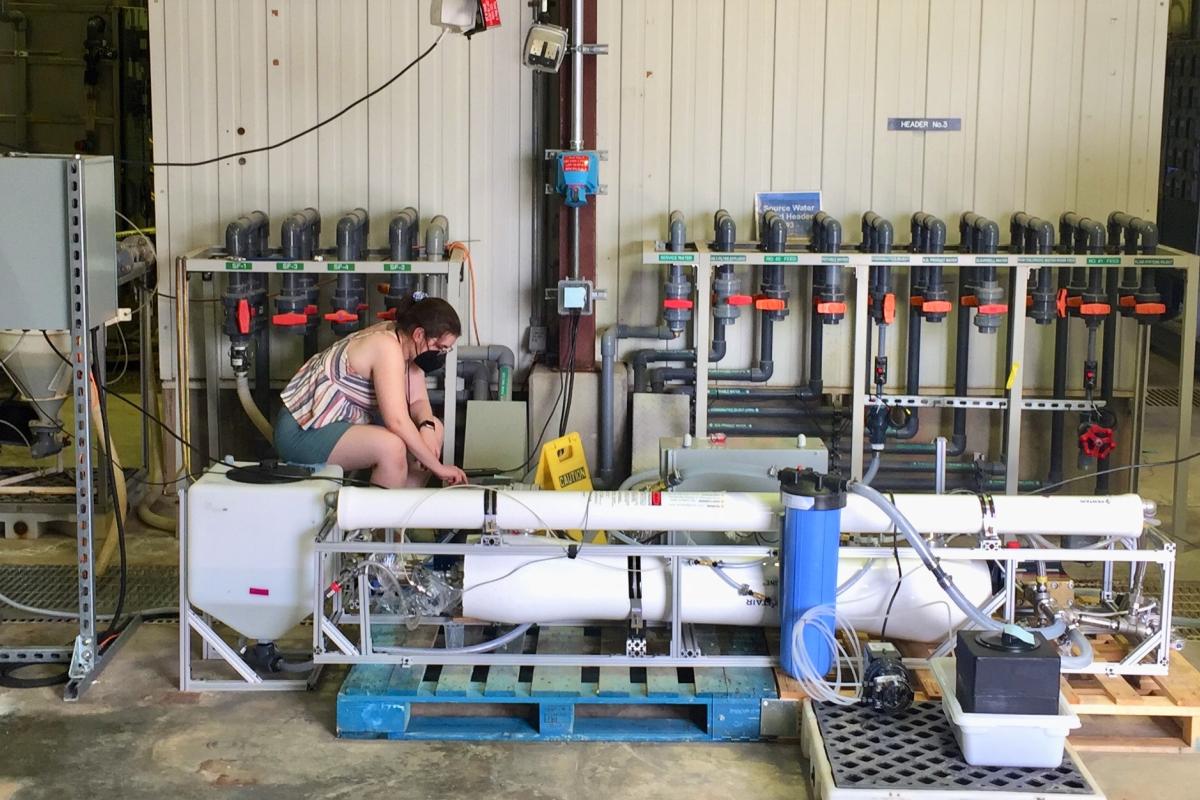 Audrey Abraham '24 works on the purification system, with its water tanks out of frame on the far left and far right. To view the entire prototype with tanks, see the link below.

Download the full-size image of the team's system here - it's amazing!

The Bureau of Reclamation was established in 1902 and is now the second-largest producer of hydroelectric power and the largest wholesaler of water in the country, bringing water to more than 31 million people in the western United States.

The Tow lab continues their research in membrane scaling prediction in batch RO in hopes of defining bold but safe operating conditions for wastewater recovery. They will continue to collaborate with Harmony Desalting, which is conducting a long-term test of the prototype at the Yuma Desalting Plant and leading the next phase of scaling up the batch RO technology.