Oliners at NASA’s JPL (pt. 1 of 2): Robotics Engineers Blair E. and Spencer B.

Designing satellites with robotic arms to create a modular platform for scientific instruments, grippers to enable remotely operated [underwater] vehicles (ROVs) to latch onto deep-sea cliffs, and more are all projects you will find in the robotics division of NASA’s Jet Propulsion Laboratory (JPL). With a unique mix of government, academia, and industry; a noble mission of advancing the frontiers of scientific knowledge; and a collection of brilliant and motivated individuals, JPL provides opportunities and experiences unlike any other workplace. Hear from Olin alumni Blair Emanuel and Spencer Backus about their careers in robotics at JPL and how they have contributed to JPL’s mission.

As a robotics mechanical engineer, Blair designs, builds, tests, and maintains robotic systems. As that list suggests, Blair’s responsibilities span a broad spectrum, entailing everything from, “…coming up with a concept doodle of what a robot should look like, to… taking apart a five-year-old robot and figuring out what is causing an electrical bug.”

After graduating Olin with a degree in Mechanical Engineering, Blair pursued a research master’s at Carnegie Mellon University where she worked in the Experimental Biomechatronics Laboratory that focuses on powered exoskeletons. There, she led a group of students on a project to design and build a stability testing system. “Knocking over a person in a scientific manner is not easy,” Blair remarked, also noting that the experience taught her a lot about how walking works and, more broadly, proved a beneficial experience in developing her mechanical engineering and research skills.

Blair worked on both the robot and the interface that the sensor modules would connect to. A takeaway from the project, she said, was learning about how interconnected the systems are. Cable stiffness, for example, affects the vibrational isolation of the sensor, so there are considerations surrounding the thickness of a wire’s tubing. The interface also comprises more than just electrical connectors, as cooling fluid must be circulated through the instruments. “At first,” she elaborated, “you’re like, ‘Oh, an interface, you just plug it in and it’s fine,’ and then you just keep thinking of all of these systems… and how much they interfere with each other.”

After contributing to the satellite project up until its testing phase, Blair switched to working on the Europa Lander autonomy hardware and sampling teams. The goal of the potential mission to Jupiter’s moon Europa is to search for signs of life by excavating under its surface and extracting samples for on-lander analysis. Specifically, Blair is working on the design of the tool that would be used for gathering samples.

For many reasons this is a challenging endeavor, one of which being the uncertainty surrounding what Europa’s surface is like. “The surface might be a solid sheet of ice…, big, jagged chunks like a glacier, it might be snow, it might be gravel, it might be some weird mix of the two,” Blair listed, explaining that because of the need to account for this diversity of possible outcomes, everything from chain saws to counter-rotating cutters were being considered. 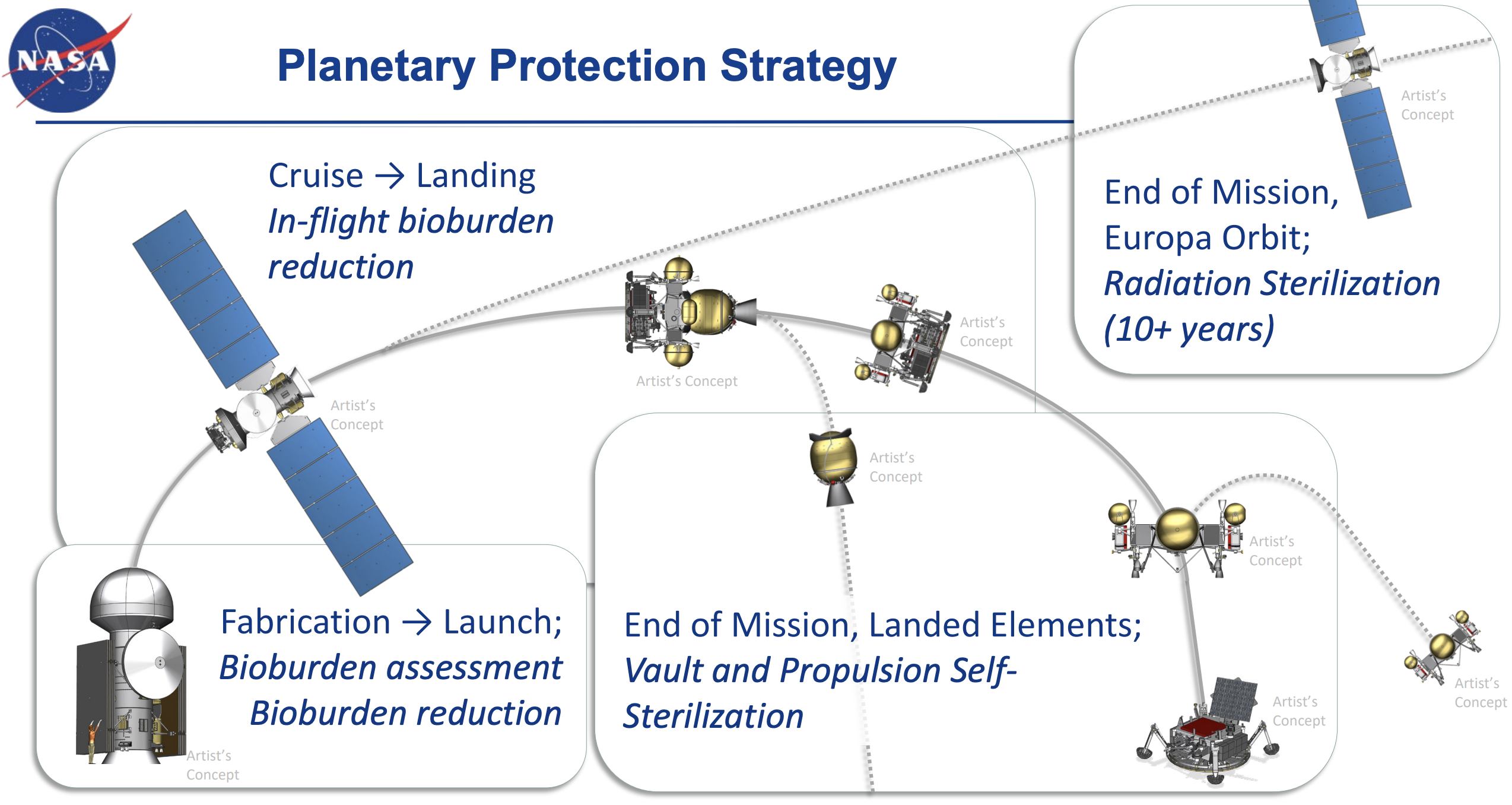 Regardless of the outcome of the mission – whether life is found on Europa or not – Blair really wants to see a photo from the surface of Europa and is motivated by the learning opportunities the project provides. “You’re constantly learning new things,” she described, citing her expansion of knowledge in material science and opportunity to learn from engineers in other divisions of JPL about flight-centric disciplines like procedures for documenting testing.

To work on these kinds of research projects with numerous learning opportunities is also a lot of fun for Blair. Indeed, on her path to this position at JPL, one of Blair’s heuristics has been pursuing what most interested her. When asked what advice she has for someone who wanted to follow a path similar to hers, she advised, “Figure out what you’re interested in… And make sure that people know what your interests are… People are excited when they find out you’re excited, and they are going to be more likely to… share that interest with you [and] help cultivate it.”

Like Blair, Spencer is also a robotics mechanical engineer at JPL. Following the completion of his Mechanical Engineering degree at Olin, Spencer pursued a master’s and PhD in robotics from Yale in which, for his PhD thesis, he developed a novel end effector for use with unmanned ariel vehicles (UAVs); this end effector was designed to enable UAVs to reliably grasp objects while in flight.

After graduating from Yale, Spencer began work at JPL and joined a research project in which he worked on the development and testing of the Nautilus microspine gripper. The idea behind this gripper was, as Spencer described, to, “…use a whole bunch of little hooks on very small spines that are able to engage on little bumps on a surface.” The application of the gripper explored in Spencer’s research was to enable ROVs to anchor themselves to cliffs in the deep ocean and enable geological sampling. Spencer saw this project end-to-end, with the results from the field test proving that the gripper was effective in achieving this goal.

After completing this project and spending some time working on the same satellite project that Blair did, Spencer is now working on multiple projects, including the development of a lower-cost robotic arm capable of operating on the moon. “On the moon,” explained Spencer, “we talk about going from -180°C to 130°C depending on if you are in the shade or in the sun… lubricants don’t work or do weird things… at cold temperatures they break down. So normally, [for] most of these systems you have to insulate them and heat them to run at ambient temperature and do all of these complicated things you wouldn’t have to do on a terrestrial… mechanical system.” The thesis of Spencer’s research is to show the efficacy of using novel materials in robotic systems that eliminate the need for some traditional measures – like insulation and heating – that add complexity and cost.

Spencer is also simultaneously working on concept development for returning Martian rock and soil samples to Earth. Specifically, he is contributing to the part of the potential mission where Martian samples would be transferred into an earthbound spacecraft by a robotic mechanism while orbiting Mars. Among the numerous considerations for such an endeavor is the need to protect Martian samples from being contaminated by something from Earth and vice versa. In a reference to Olin’s User-Oriented Collaborative Design (UOCD) course, Spencer described the project as, “…not quite at the UOCD-level of [sticky-notes] and user personas, but that kind of high-level of trade studies, spit-balling ideas, and working with stakeholders to understand [for example], ‘I have to put it in your box and your box has to fit within these constraints and I need you to do this for me…’”

Considering the diversity of stakeholders involved in engineering for the Martian sample return endeavor and the drive to make the lower-cost robotic arm available to purchase by entities external to JPL, Spencer has had a lot of experience at the intersection of technical R&D work and synthesizing stakeholder needs into a succinct set of requirements. Although JPL is distinct from commercial companies in that it is primarily driven by government funded research and space exploration, Spencer explained that there are many individuals – such as a program manager in headquarters or a research project’s principal investigator – who, “…very much are your customers as the engineer. As the engineer, you have to understand what each of them cares about, what their priorities are, and make sure you speak to those priorities.”

Referencing the broader organization, Spencer said, “We are taking these large technical challenges and, as an organization, chopping them up into smaller and smaller subsystems, and then putting experienced, smart people on them to come up with good solutions.” Speaking to his contribution to this broader mission, Spencer noted that his expertise in the niche of robot end effectors predisposes him well to the many scenarios at JPL in which there is a need for a robot to manipulate its environment.

To those also interested in pursuing a career path like his, Spencer recommended that you immerse yourself in your field of interest, including reading news publications, academic publications, and engaging with people in that field, as it is essential when developing something new to expand upon prior work rather than working in a vacuum. At the same time, Spencer also highlighted his efforts to intentionally explore beyond this niche as being formative in his journey to his current position. In speaking to his diverse internship experiences, Spencer explained, “It gave me this broad background of different skills and experiences and network of people to draw on, but… [it also] keeps you motivated to keep working, keep trying new things…”

Complementing Spencer’s reference to Olin’s UOCD class when talking about the importance of designing around a variety of stakeholder needs, Blair spoke to a parallel between research at JPL and the Olin curriculum: “We [Oliners] have a lot of experience with design iteration, with rapidly coming up with new ideas and implementing them – and on research projects, that’s what you’re doing. You’re working on brand new concepts [and] brand new ideas.”