What does it mean when someone’s body doesn’t mesh with their physical environment? Are challenges like having trouble climbing stairs or navigating a crowded sidewalk experienced only by people with disabilities, or are they actually pretty common, such as when people are ill, pregnant, sensory overloaded, or elderly?

“Acknowledging the dignity—and, for most of us, the inevitability—of dependence, and designing for it, can be a resource for asking better questions about our lives, and for generating designed solutions,” says Sara Hendren, associate professor of design at Olin. “If we could see ourselves and each other differently, we could imagine a world built to accommodate the full spectrum of our humanity.” Her new book, What Can a Body Do? How We Meet the Built World, published by Penguin Random House in August 2020, explores this intersection of design and disability, and some of the ways that the built environment (human-made) can evolve to welcome multiple kinds of bodies and experiences.

“We have a great privilege at Olin to be able to define the spheres of impact where we’d like to work, and I thought it was important to write something accessible." 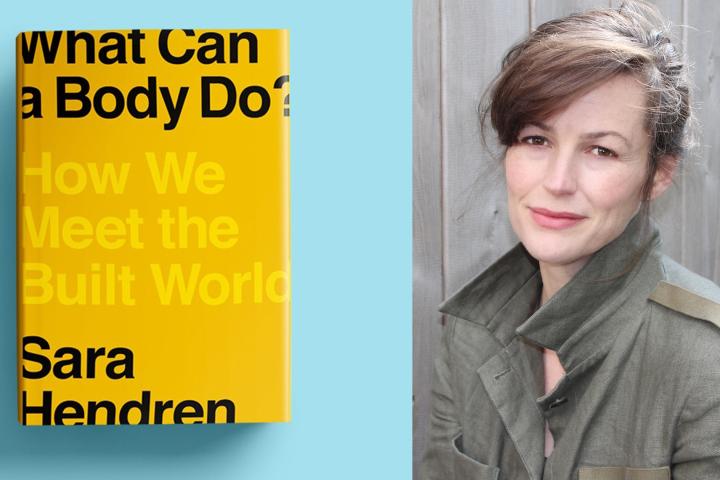 At Olin, Hendren often works in a domain called Rehabilitation Engineering, but she’s spent the past decade researching, interviewing, and reading about people whose lives are full of designed objects that defy the limits of that domain. “The book is full of those stories—moments when the atypical body meets the design world.”

Some of these stories are about great feats of high-tech engineering, and others involve low-tech homemade devices, both of which are meaningful. A one-handed man named Chris, for example, came up with a way to wrangle diaper-changing byusing his shoulder to suspend his baby’s ankles with a holster he fashioned from soft cords and felt. Cindy, a woman who lost parts of all four limbs, found that her sophisticated, $90,000 robotic hand was a “cumbersome attempt to restore her body to ‘normal’ function that only succeeded in slowing her down.” Hendren details the way Cindy engineered simple constructions, made with everyday materials, to create hacks that helped, without involving the prosthesis.

On the opposite end of the tech scale, there’s Steve, who lives in a software-fueled home he designed for himself and two dozen others after learning he had ALS, a disease that caused him to lose nearly all movement. “In Steve’s life, I saw a constellation of designed gear and services that changed my perspective and my vocabulary about assistance—about human needfulness and its role in a desirable life,” writes Hendren. Through their experiences, Hendren shows how the bodies that are the least conventionally “able” have always confronted barriers between their bodies and the built world, and that they may have the most to teach us.

The Olin community has been privy to Hendren’s first-hand perspective, as she’s guided students toward taking into account the ways that diverse bodies interact with their physical surroundings. She’s dedicated the book to students in her Investigating Normal classes, which asks students to consider questions about normalcy, ability, and cultural ideas about the body while they work to create assistive technologies and prosthetics. Central tenets of her classes are also central themes in the book:  All technology is assistive technology. Ability and disability can be an exciting, expansive lens through which to view many bodies, many kinds of needs, and many ways to approach design and engineering.

Hendren decided to write a nonacademic book in order to translate complex yet relatable ideas about disability and design for the general reader. “We have a great privilege at Olin to be able to define the spheres of impact where we’d like to work, and I thought it was important to write something accessible,” she says. One of her goals in writing the book was to connect with readers who imagine they’re not connected to disability because they don’t use a wheelchair or have a certain diagnosis. “I want the reader to see disability everywhere and not to think of it as a hierarchy of who is “more” or “less” disabled, but to see it as a fundamentally human experience, and a site of deep creativity,” she says. “I invite readers to see themselves connected to these stories and conditions so they can make better choices in future when their bodies change or their loved ones’ bodies change.”