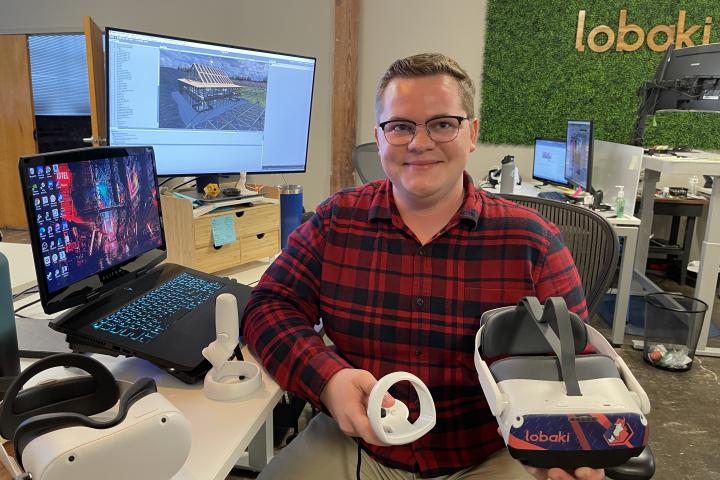 For Zack Davenport ’20, an Affordable Design and Entrepreneurship (ADE) capstone project in the Mississippi Delta launched his desire to use education to bring good into the world.

In the summer of 2018, Davenport helped convey to students how engineers think—a style of problem-solving that was new to these high schoolers, many of whom had never seen a 3D printer or used a soldering tool before.

While he was on location, Davenport met the founder of Lobaki Inc., located in nearby Jackson, which uses immersive VR technology to make education more accessible and engaging. He did a side project for them that summer, and that innovative work for Lobaki led to an invitation for more projects the following summer, which led to a job offer after Davenport graduated in 2020.

“I felt really lucky because they were one of the few companies hiring during the pandemic,” said Davenport. “It’s the perfect work for me because I get to do all of the super fun design stuff that I grew so passionate about in college, but in VR I’m not limited by the laws of physics as much and I can create whatever I want.”

Today, Davenport is Lobaki’s manager of education and special projects, an important role that has him running the company’s VR content development for educational experiences used in schools across the state of Mississippi.

“A lot of what I learned at Olin was harnessing my passion for creativity and bringing my ideas to life by designing things through ME,” said Davenport. “Olin teaches you how to dive into a problem or discipline that you’ve never had experience with, and how to be in that space of learning new things and growing as a person and a professional. This kind of problem-solving

mindset can get you far in life, no matter what your discipline is.”

“I gained so much from my Olin experience, and even since graduating, I’ve felt like I’m still a part of the community,” said Davenport. “Donating to Olin not only makes me feel connected to the community, but also helps ensure that the College is able to give to future students what it gave to me.”