The Raytheon team is investigating aspects of multi-function radar arrays, an emerging technology in radar. By using the same hardware to transmit multiple simultaneous signals (i.e. radar and communications waveforms), multi-function systems promise to reduce footprint and overall costs of apertures on a given platform, making possible projects such as CASA: a distributed system of short-range weather radars that can be networked via the sensor aperture.

Transmitting communications signals through radar systems comes with a host of interesting challenges. Amplifiers used for radars are typically operated in a manner that maximizes efficiency. This mode of operation leads to significant distortion of communications signals. The Raytheon team is tasked with 1) selecting classes of communications and radar waveforms that exhibit good performance when transmitted through a typical power amplifier and 2), validating these waveforms using off-the-shelf hardware. 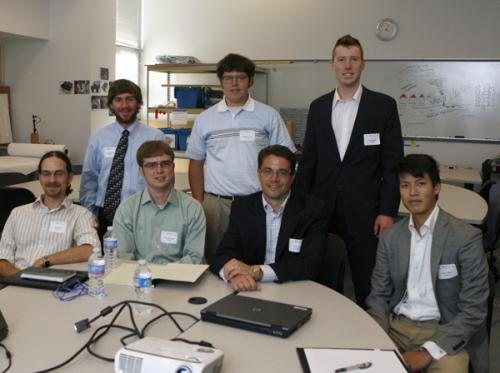