Find Your Olin: What It Means To Be An Engineer

Hello hello hello to all you wonderful human beans! My name is Arla (pronouns she/her) and I’m a first-year student at Olin.

I was in your shoes a year ago, trying to decide what the heck I was going to do for the next four years of my life. In front of me I had three options: two of them relatively large state schools, the other Olin. The two categories couldn’t be more different, and it felt strange that these were the options in front of me.

For years, I’d imagined myself in college going to big soccer games, exploring the city (which city it was didn’t really matter), studying in the decades-old library (again the specific library didn’t matter, as long as it was old), and generally surrounded by students I didn’t know buzzing around, running to class, and playing frisbee on the lawn. The state schools felt like the safe choice in that they were natural extensions of my path in high school and the vision I had in my mind for college. I’d only heard of Olin a few months earlier and barely knew anything before going to Candidates’ Weekend. Plus, I didn’t know if I even wanted to be an engineer—why would I go to a college that only offered engineering degrees?? (this was a big thing for me; more on this later).

But for other reasons, Olin also felt incredibly safe. I grew up in a really small community and knew what it felt like to have a safety net and to have people looking out for you. If I went to Olin, I’d be 3,000 miles away from home—a small community within a BIG world would definitely be comforting. The conflict between big and small began to shrink; I’d either be at a big school or at a tiny school within a big world (and why did my bigness have to be found within my school?). The sticking point for me became “??? do I want to be an engineer ???”

I still don’t really know the answer to that question. And believe me, I’ve thought a lot about what it means to be an engineer in the last year (in large part thanks to Olin’s curriculum, faculty, and students). I loved the idea of solving real problems and learning techniques for how to do that most effectively/thoughtfully as an underlying theme for my education. In this way, engineering was perfect. But still, I really couldn’t imagine myself building infrastructure, writing code, or building robots (sorry to all you robotics people out there; I’m in the nobotics family). To me, these things felt too removed from people and from meaningful change. It also felt like I was boxing myself into being a nerd (in the best sense; my friends from home now regularly call Olin “nerd school,” and it makes me smile). Sure, I enjoyed my calculus class in high school and building things with my hands was fun, but was I going to like STEM (Science, Technology, Engineering, and Mathematics) for the rest of my life?

If you’re in the same boat as me, wondering “??? do I want to be an engineer ???” know that’s completely fine. A big reason why I chose Olin (which runs sort of tangential to all of this) is that Olin teaches skills that are valuable to students regardless of what profession they go into after graduating: how to learn, how to work well on a team, how to ask questions, and how to question your assumptions. In my first few weeks at Olin I heard a senior say that they weren’t planning to be an engineer after leaving Olin. It surprised me, but now it seems to make so much sense. At other engineering schools (at least in my understanding; I’ve never been to one), students are taught specific skills like calculus, coding, physics, circuitry, etc. At Olin, we’re taught more skills that bridge the gap between the engineering world and all the other worlds we interact with and are a part of. At the same time, we’re still extremely legit engineers! For me, that was exactly what I needed.

If you have any questions at all or just want to chat, I’d love to say hi! asutton@olin.edu 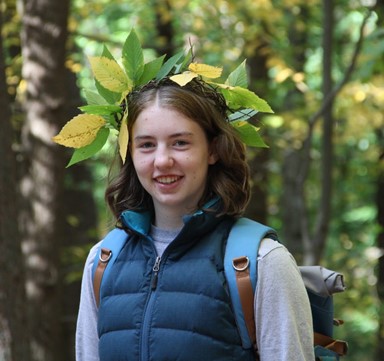 Arla Sutton is a first-year from Orcas Island, Washington who is passionate about the environment, overalls, and human-centered engineering.